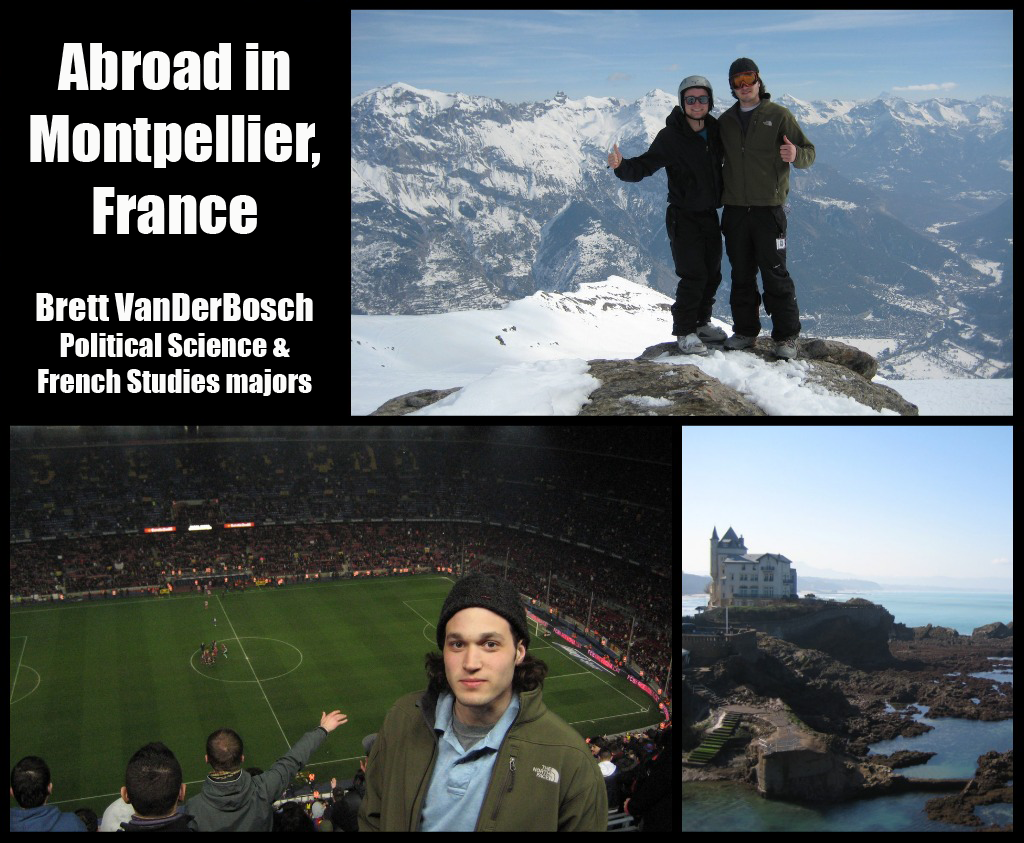 What’s your major?
I am majoring in both Political Science and Interdisciplinary French Studies.

Where are you studying?
I am currently in Montpellier, France which is located just a couple miles off the Mediterranean Sea in the South of France, which is absolutely beautiful and warm!

How long will you be abroad?
I arrived here January 14th and will be leaving May 25th.

What type of courses are you taking?
I am in an integrated studies track, therefor all of my classes are in French, at a French university, and with French or other international students. The program is ran through the University of Minnesota- Twin Cities so it is very simple to apply and communicate as of U of M student. Also, the program directors and assistants here are awesome! They are very helpful and nice.

What is your favorite memory from your study abroad experience?
My favorite memory, which is hard to pinpoint because there are so many, would most likely be all of the people I've met and relationships formed with people from all over Europe. I have made lifelong friends from all over here.

What is your favorite local landmark?
The beach!!! I also love all the classic French architecture and history of the city. There is also the "Place de la Comédie" which is a very large, wide open square lined with cafés, fountains, trees, and beautiful architecture. It is the focal point of the city where everyone meets before lunch, dinner, or a night on the town.

What are your living accommodations?
I live in a typical French apartment in downtown Montpellier. It is just 3 blocks from Place de la Comédie as well as the tram stop. The apartment is old and nothing like found in the States (ex. I haven't seen a single smoke alarm here) but I've adjusted and grown to like it, especially the location.

What is your greatest challenge while being abroad?
That would have to be the first few weeks in general because things you are comfortable with become much more intimidating in a new culture and language. I have been speaking French for many years but it was still difficult to initiate a conversation or ask directions due to shyness and self-doubt. The scariest thing was being asked my opinion on a piece of 19th century French Literature in one of my courses because I was a little lost! Thankfully the professors are very nice and understanding so she moved to another student quickly.

What skills have you acquired abroad?
I would say it is a mix of things. To be able to adjust and live in a whole new culture, where I did not know a single person prior was a great experience. I grew to love it and thrive here, which has given me a sense of self-confidence, open-mindedness, and perspective that I never could have imagined before. It is great to be able to look at my own culture and upbringing from a new perspective and has me understand who I am much better, as well as appreciate things I had not before.

Has study abroad influenced your academic/career path?
My study abroad was ideal because all of my credits are transferable, in fact I added my second (Inter. French Studies) major because I could study abroad, graduate on time, and pursue studying something I love (French language and Culuture). Being here, has made me want to pursue more international experiences after I graduate. Whether it be teaching, studying, or working I feel as though I need to return at some point.

What were questions you were commonly asked by local residents?
This one is a little funny. First and foremost "Are you from New York City?" if not "California?" I actually carry a pocket notebook with a map of the States to point out Minnesota. I am asked frequently what I think of France, if I watch "How I Met your Mother" (French people love that show) or what am studying here. I would like to note, contrary to stereotypes, the people of France that I have met here are some of the most friendly and hospitable people I have ever met. So most everyone is willing to strike up a conversation and genuinely interested in what you have to say.