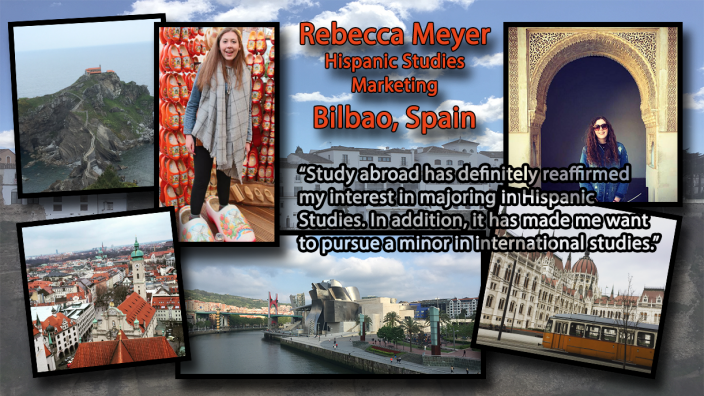 What are your majors?
Hispanic Studies and Marketing

How long were you abroad?
I was abroad from January through May 2016.

What type of courses did you take?
While I was abroad, I took quite a few courses ranging from Spanish language and culture courses to business courses. For example, I took an international marketing class as well as a European economics class. I also took a basque culture class and a class about culture and politics in contemporary Spain. I think my favorite class was probably my class about contemporary Spain.

What is your favorite memory from your study abroad experience?
I had so many amazing memories and experiences during my semester abroad so it is very difficult to pick just one favorite! Some of my favorite memories are all of the trips I made and the friends I met during my study abroad experience. For example, during my Spring Break, I backpacked around Austria, Hungary, and the Czech Republic, and Spain with some friends from my program. I was also able to met up with one of my friends from the Czech Republic during that trip, which I never thought I would be able to do again.

What would you say to someone considering studying abroad?
I would say do it for sure! Not only will you get to travel the world, you will also meet lifelong friends along the way. I would also highly recommend living with a host family if your program allows it. I stayed with a host family and it was one of the best decisions I ever made in the study abroad process. Lastly, I would recommend to set a budget for yourself or just keep track of your expenses. Some of my friends came close to running out of money before the end of the trip which is definitely not an optimal situation to be in.

What is/was your favorite local landmark?
One of my favorite local landmarks was Mount Artxanda, which is a mountain that has stunning views of the city of Bilbao, and the mountains surrounding Bilbao, from the top. Also, I can never get tired of looking at el Museo Guggenheim or Puppy, an enormous puppy statue made of flowers.

What were your living accommodations?
I lived with a host family in an apartment in Bilbao. I had two host parents, a host brother, and a host dog. Like I mentioned before, choosing to live with a host family was one of the best decisions I made in the study abroad process. My family and I became really close and I still talk with them frequently! Because I was with a host family I was constantly speaking and improving my Spanish and fully immersed in the culture.

What questions you were asked by local residents?
A lot of locals just asked me about where I was from, what I was studying, and if I was enjoying Bilbao. A few would mention the current political situation in the US, however, many people were just curious about what Minnesota was like.

What was your greatest challenge while being abroad?
I think that my greatest challenge while being abroad was adapting to the Spanish schedule. In the states, I would always chill after school and then after dinner I would finish my homework or study. However, in Spain my family and I didn't eat dinner until around 9:30pm which doesn't allot too much time for studying or doing schoolwork so I had to edit my routine. In addition, some stores are closed during a siesta period during the afternoon and almost all stores are closed on Sundays so if you ever need to buy anything or meet anyone somewhere, you need to accommodate to that schedule.

What skills have you acquired since being abroad?
After studying abroad, I think I am more adaptive and decisive. For example, like I mentioned before, I had to adapt to the Spanish schedule and culture while living with a host family. In addition, while traveling around Europe I was constantly adapting and immersing myself in different cultures and customs. I think I also improved my decision making as I now feel more confident and comfortable making quick decisions.

Has study abroad influenced your academic/career path?
Study abroad has definitely reaffirmed my interest in majoring in Hispanic Studies. In addition, it has made me want to pursue a minor in international studies.