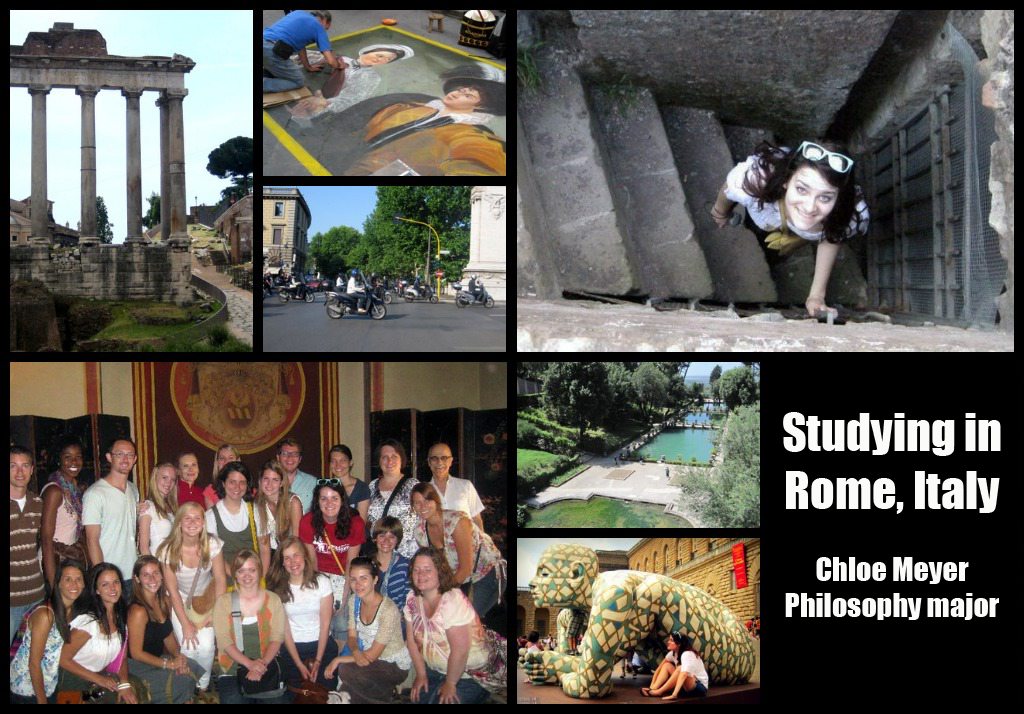 What is your major?
Philosophy

Where did you study abroad, through what program/course, and how long were you there?
I studies abroad in Rome, Italy for May term (May18th - June 11th) through the University of Minnesota Twin Cities through the Art History department.  It was titled "All Roads Lead to Rome."

What did your course consist of doing?
My course consisted of 3 hours of lecture M-F followed by 3 hours of excursion class time where we would visit museums, churches, homes and various architectural and sculptural pieces around the city of Rome.  The points mainly came from participation and our final paper regarding everything we had learned.

What is your favorite memory from your study abroad experience?
It's really hard to say what my favorite memory from Rome was. Our last day we had a day trip as a class to the gardens in Tivoli just outside of Rome which were absolutely beautiful and on top of that our class dinner we had that night really topped off the whole trip nicely.  As a class we also met the princess of Rome which was pretty cool (the title is no longer recognized but she is from Texas as is married to who would be the Prince of Rome).  I also really enjoyed my day trip with a friend to Florence where we shopped, saw beautiful architecture, and ran into the Jersey Shore cast, but even more than that, one of my favorite moments in Italy was sitting on the balcony of our 7th floor apartment, reading a book and overlooking the city.  I felt like I really took in Italy during those few hours, just watching the sun set over the Vatican.

What would you say to someone considering studying abroad?
If anyone told me they were thinking about studying abroad I would say seriously GO FOR IT.  You will NEVER regret.  There are so many things you will learn about this other culture as well as yourself and your culture back home.  You can never get the same perspective that you get when you're in a completely new place.  And while you're there, take it all in, eat all of the food (even if it looks scary), don't be shy to try and use the language, see everything you want to see and search for those places off the beaten track, because more often than not, those will be your favorites.  At the same time, don't forget to stop and take everything in, you're only there for a short while so enjoy it for all it's worth.  Have an open mind, know that where you're going will not be home with different landscaping, there will be things you miss about home but there will also be things you can't believe you've been living without.  It'll be weird and different, but different isn't bad, if anything it's one of the best and most exciting parts, appreciate it for all it's worth.  And above all else, BE SAFE, you're in unfamiliar territory so by all means have fun but always keep your best interest in mind.

Has study abroad influenced your academic/career path?
As far as my future is concerned, I would say my experience has hugely impacted me.  I now have a better understanding of what it means to be abroad.  You can have this idea in your mind of what it is to travel but you can't get the full understanding until you've flown there, met the people, walked the streets, eaten the food, made same mistakes, gotten a little lost, and fumbled over the language.  There's really nothing like it, I've learned so much about myself, I've come to appreciate things I've taken for granted yet I've been given that taste of traveling and I'm ready for more.  I would have to say that this trip solidified my want to travel and possibly link my career to that want.

Photos:
Me at the Palatine Ruins
Me in Florence
Part of the Forum in Rome
Street chalk drawing, these artists were all around Rome and Florence
Mopeds!  There are TONS of these, probably a 1:1 ratio of mopeds to cars
The gardens in Tivoli
A fountain in the garden of Tivoli
The whole class meeting the principessa (princess)