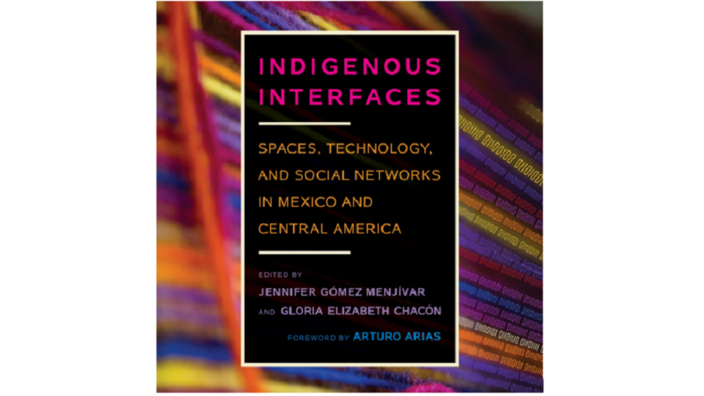 The book examines Indigenous peoples’ use of cybertechnology.

The Department of World Languages and Cultures is pleased to announce that Dr. Jennifer Gómez Menjívar, Associate Professor of Spanish and Latin American Studies, has a new book forthcoming in spring 2019. Co-edited with Gloria Elizabeth Chacón, the book is entitled Indigenous Interfaces: Spaces, Technology and Social Networks in Mexico and Central America. The collection of essays will be published by the University of Arizona Press.

In Mexico and throughout Central America, cultural preservation, linguistic revitalization, intellectual heritage, and environmental sustainability became central to Indigenous rights agendas after 1992, the five-hundredth anniversary of the Spanish invasion of the Americas. Although the emergence of these issues triggered important conversations, none have examined the role that cybertechnology has played in accomplishing these objectives.

This volume provides the first thorough examination of the interface between indigeneity and cyberspace and, correspondingly, the impact of new media on Indigenous communities’ struggles for self-determination in Mexico and Central America. Its contributors address the fresh approaches that Mesoamerica’s Indigenous peoples have given to new media—from YouTubing Maya rock music to hashtagging in Zapotec—in order to both maintain tradition and ensure continuity. It argues convincingly that without consideration of cyberspatial networking, Indigenous experience in Mexico and Central America cannot be successfully documented, evaluated, and comprehended.

Indigenous Interfaces rejects the myth that Indigeneity and information technology are incompatible and offers a compelling look at the relationships that tie contemporary Indigenous peoples to new media. It illustrates how Indigenous peoples have selectively and strategically chosen to interface with cybertechnology, highlights Indigenous interpretations of new media, presents Indigenous communities who have reset modes of communication and redirected the flow of information to lay claim to autonomous and sovereign ways of being Indigenous in the twenty-first century.

“This volume’s spectacular breadth and depth of scholarship from many disciplines, as well as a diverse representation of Indigenous peoples and technologies, makes it a much-needed contribution to the growing field of Indigenous technologies and futurisms.” —Kelly S. McDonough, University of Texas at Austin

“This is an excellent and timely book, well-written and conceived, clear, and meaningful. Each contributor brings new research to the discussion while engaging with applicable scholars and critics. —Elizabeth C. Martinez, DePaul University