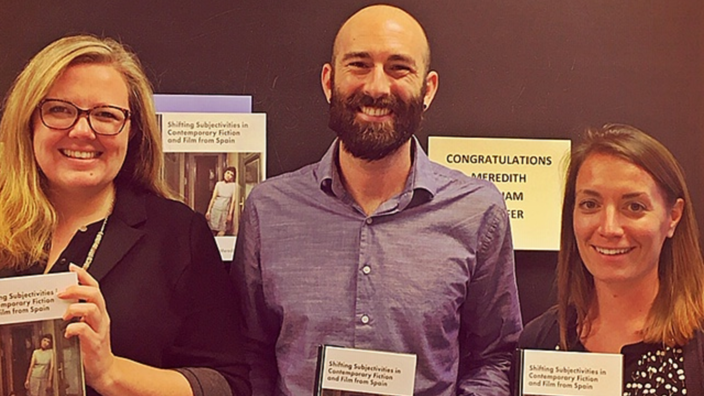 This book analyzes notions of self and subjectivities in literature and film in Spain in the twenty first century.

The Department of World Languages and Cultures is please to announce that Dr. Jennifer Brady, Associate Professor of Hispanic Studies, has co-edited a book with Meredith L. Jeffers entitled Shifting Subjectivities in Contemporary Fiction and Film from Spain. Brady also penned a chapter in the book, and Professor of Hispanic Studies and WLC Department Head Maureen Tobin Stanley contributed a chapter to the volume as well. This collection of essays analyzes shifting notions of self as represented in films and novels written and produced in Spain in the twenty-first century. In doing so, the anthology establishes an international dialogue of multicultural perspectives on trends in contemporary Spain, and serves as a useful reference for scholars and students of Spanish literature and cinema. The primary avenues of exploration include representations of recovery in post-crisis Spain, marginalized texts and identities, silenced subjectivities, intersecting relationships, and spaces of desire and control. The individual chapters focus on major events, such as the global economic crisis, the tension between majority and minority cultures within Spain, and the ongoing repercussions of past trauma and historical memory. In doing so, they build upon theories of identity, subjectivity, gender, history, memory, and normativity.

Pictured above are Professor Brady (left) and Professor Jeffers (right), along with book contributor Graham Ignizio (center), during a book release presentation at Metropolitan State University of Denver.
Return to WLC News & Events