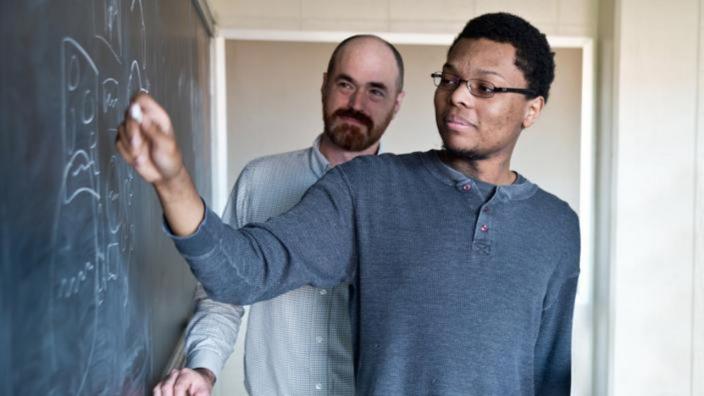 UMD Computer Science student Charles McGregor is working on an app that incorporates video game elements into language learning. Working with Dan Nolan, assistant professor of German (pictured behind Charles, above), Dana Lindaman, assistant professor of French, and other professors, Charles is using his artistic and video game knowledge to develop a French and German language game app that makes learning verb conjugation and pronunciation in the two languages an interactive experience.

In the game, beginners start slowly by drawing a line between a noun and a verb. The game moves faster, and the French or German words get harder as players rack up points. "It's learning without pain," Nolan says. The researchers are confident their game will be a success. The German grammar app they developed in 2015 has already reached thousands, via free downloads.

Charles is contributing to a mobile language learning game development project — MOBLL Group (mobll.dash.umn.edu), and he's been a key contributor to the UMD project throughout, including evaluation in classes at UMD and offering suggestions for research questions.

Click here to see the complete article about his projects

Click here to return to WLC News and Events