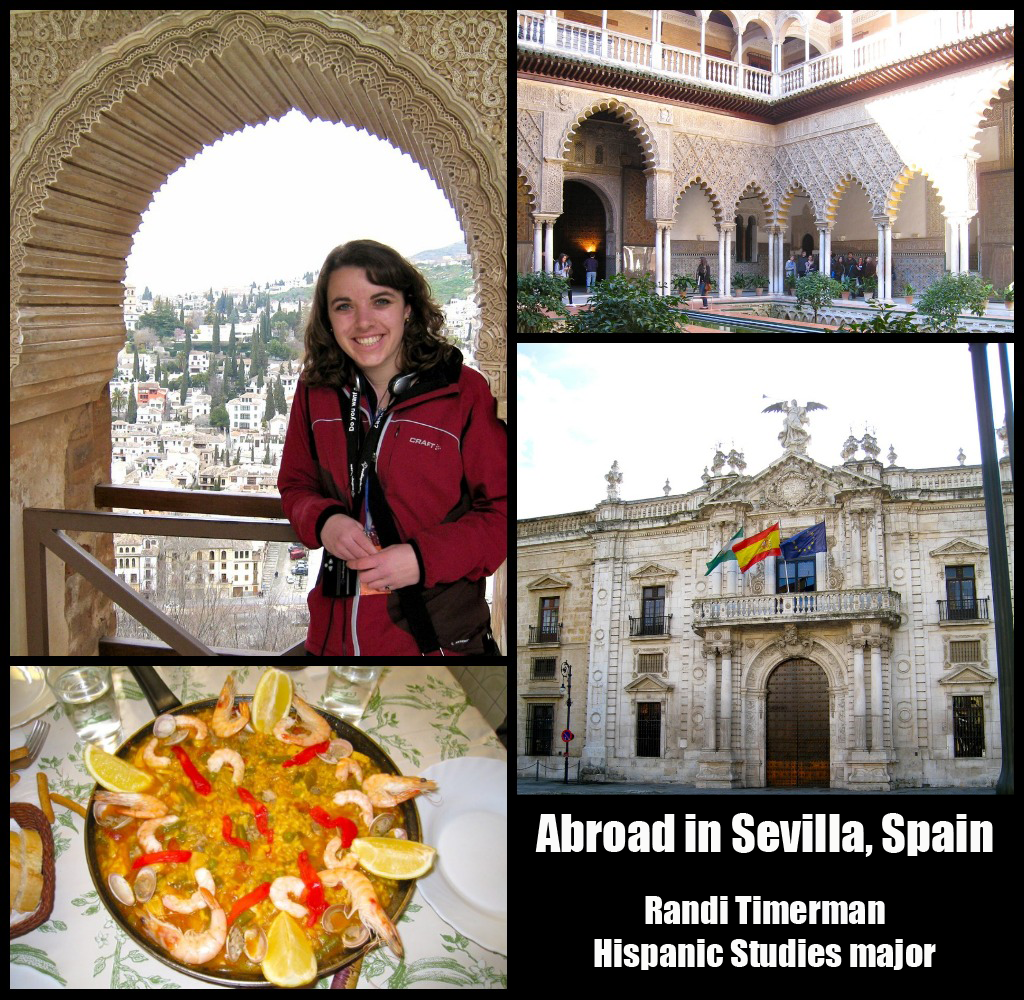 What’s your major?
I am a Spanish and Biochemistry double major as well as a Pre-med student.

Where are you studying?
I am studying at the Universidad de Sevilla in Sevilla, Spain.  Sevilla is the capital of the autonomous region of Andalucía in southern Spain and approximately one hour from the ocean.

How long will you be abroad?
I will be abroad for a total of four and a half to five months.  I arrived in Spain on the 30th of January, and after my program ends in the middle of May I will be traveling around Europe until the 23rd of June.

What type of courses are you taking?
My program here in Sevilla is titled Spanish Language and Humanities, so I am not taking any sciences classes this semester.  I am taking five classes, two literature classes (Don Quijote and The Arab Influence on Spanish Literature), two history classes (Medieval Spain and Political History from the Spanish Civil War until Today), and a flamenco class (just for fun)! Each class meets for two hours, twice a week and usually has a 5-10 minute break halfway through period.

What does your program consist of doing?
I am studying abroad with API (Academic Programs International) which is an organization not affiliated with any university.  In addition to placing us with a host family and enrolling us in classes at the Universidad de Sevilla, API organizes excursions and cultural activities throughout the entire semester (this weekend we will be going to Morocco)!!!

What is your favorite memory from your study abroad experience?
The food.  I love seafood and with Spain being nearly surrounded by the sea, I am in heaven!! I also got extremely lucky with my host mom, and even though she says she doesn't like to cook....her food is so delicious!  Also, I love how daily life is centered around food (who will be eating, when will we eat, what will we eat, etc.?) and that it is always prepared fresh and enjoyed slowly.

What would you say to someone considering studying abroad?
Just do it!!! Don't hesitate and jump right in!  I know a full semester might be a little long for some people, but there are many short term (over summer or winter break) programs that there is no excuse not to, and I strongly believe it is an experience everyone should have!

What is your favorite local landmark?
In Sevilla, I don't think it is possible to have a single, favorite landmark.  The entire city is a work of art and I have a different type of connection to so many locations it is hard to choose just one.  One of my favorite places in Sevilla is the Alcázar (the royal palace in Sevilla) because it has some of the most beautiful Arab architecture and gorgeous gardens....and since it is free to students, it is a nice place to go and relax.  Another one of my favorite places to get lost in Sevilla is Barrio Santa Cruz; a neighborhood of narrow, winding streets, white washed houses with wrought iron balconies, and a cute café or shop around every corner.

What are your living accommodations?
While in Sevilla, I am living with a host mom (Amada) and her 81 year old mother (Dolores).  There are also two other American girls in the same program as me in the apartment (Amy from Colorado and Tayler from Washington D.C., Amy and I share a room).  We are in a neighborhood called Los Remedios and have about a 10 to 15 minute walk to the university building where are classes are held.

What is your greatest challenge while being abroad?
Before I came to Spain I was very comfortable with my level of Spanish and was expecting to meet tons of Spaniards once I got here.  However, even when you speak the language meeting people in a completely new environment is a challenge, especially when all the students in my classes are Americans from different programs.  In high school I always befriended the exchange students and I thought that the same would happen here (that I would be befriended by Spaniards), however I have had to make the first move the majority of the time.

What skills have you acquired abroad?
Spontaneity and relaxation.  I am a list maker and usually work best when I have a million things to do.  However, I feel that Spain has taught me to let go of the reigns a little, go with the flow more, and that having some "me" time is completely acceptable.

Has study abroad influenced your academic/career path?
I have always been the type of person that has a goal and a plan to achieve that goal (ie: to become a doctor - 4 years in an Undergraduate program, then Medical School, then Residency, etc.).  While I am still very passionate about becoming a doctor someday, I have realized that I can do it on my own time schedule and shouldn't be afraid to take longer than what is normal if I should feel so inclined to go travel the world.

What were questions you were commonly asked by local residents?
Aren't you cold?!?  Here in Spain, everyone is very season oriented and even if it is 75 degrees outside but the calendar says is February, you better still be wearing a sweater, coat, jeans, and boots!  Coming from Duluth, MN, I find this quite comical since everyone is in shorts and a t-shirt as soon as it hits 50 degrees.  Our first week in Sevilla our host mom was constantly surprised at our (lack of) attire to go outside and I have definitely been the recipient of many perplexed stares for wearing sandals.

I am also keeping a blog for the UMD Honors Program that you can feel free to share and pass on as well: http://sevillaspring11.blogspot.com/

Photos include: Randi at the Alhambra during an excursion to Granada, a courtyard at the Alcázar in Sevilla, the Universidad de Sevilla where Randi's classes are held (it is one of many University buildings all across the city), and paella, a traditional Spanish dish of rice and seafood.