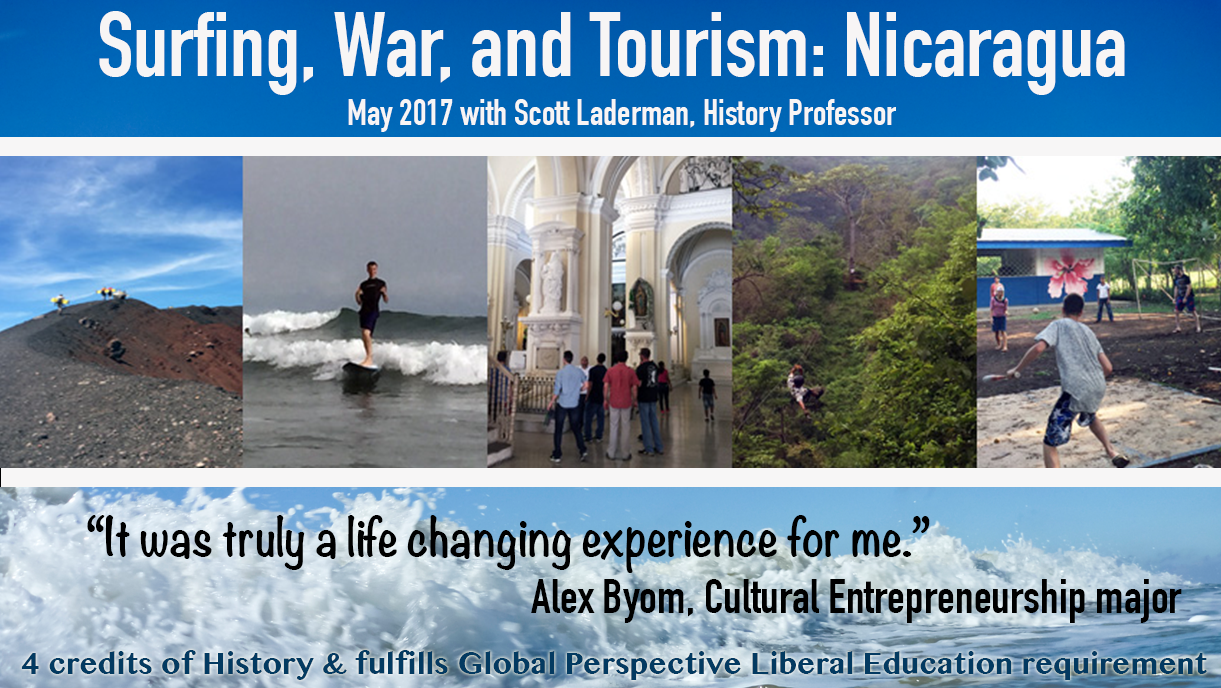 Program Leader: Dr. Scott Laderman is a professor of history. He researches and writes about surf culture and is the author of Empire in Waves: A Political History of Surfing (University of California Press, 2014).
Cities: León, Asseradores, San Juan Del Sur, Playa Hermosa and Granada
Dates: May 8–20th, 2017
Earn: 4 credits in history and fulfills Global Perspective Liberal Education requirement.

About the Class
Surfing is one of the world’s most popular cultural phenomena.  While the number of actual surfers is relatively small – probably between five and ten million people – the sport’s reach has historically extended far beyond the limited community of wave riders, influencing everything from fashion and music to film, photography, tourism, and corporate marketing.

The class explored the intersections of surfing, war, and tourism, addressing how a pastime commonly associated with mindless pleasure has in fact been implicated in some of the major global developments of the last two hundred years. These include empire-building and the “civilizing mission” in nineteenth- and early-twentieth-century Hawai‘i, modernization and economic development in the so-called Third World, the growth of international tourism following the Second World War, political mass movements and the antiapartheid struggle, American foreign relations and Cold War cultural diplomacy, and the surf industry and corporate globalization.

Who, What, Where
Dr. Laderman provided the following details of the trip. Dr. Laderman and a group of students from UMD traveled around much of western Nicaragua.  The students flew into Managua, the capital, and we then went to León, a beautiful colonial city about an hour-and-a-half away that served as the political capital of the Sandinista movement in the 1970s and 1980s.  We spent a couple of days there before heading to the northwest coast in a village called Asseradores (it's near Chinandega).  We spent several days there surfing, participating in community activities (a trash cleanup, a baseball game and a Zumba class with the local kids), and having class sessions.  From there we traveled to the southwest coast to a place called Playa Hermosa, which is about 10 kilometers south of San Juan del Sur and approximately four miles from the Costa Rica border.  We continued to surf, study, and participate in community activities (lunch with a women's jam-making cooperative and a baseball game with local kids).  After Playa Hermosa we traveled to Granada, another beautiful colonial city (and one burned to the ground by the American filibuster William Walker in the 1850s), which we toured before returning to Managua for our flight back to the United States.

Why participate in this program?
This program allows students to experience the beauty and cultures of Central America and the thrill of surfing while learning about surf culture, the sordid role of the United States in Latin America, and the explosive growth of the tourism industry.

Student Perspective
"It was truly a life changing experience for me. It was my first time out of the country so I was very excited and intrigued at the same time.  It was my first time seeing that kind of poverty so being immersed in it definitely made me want to give back more and just live simpler myself.”  Alex describes surfing at Playa Hermosa as one of his top 3 experiences in life so far, and the highlight of this trip.