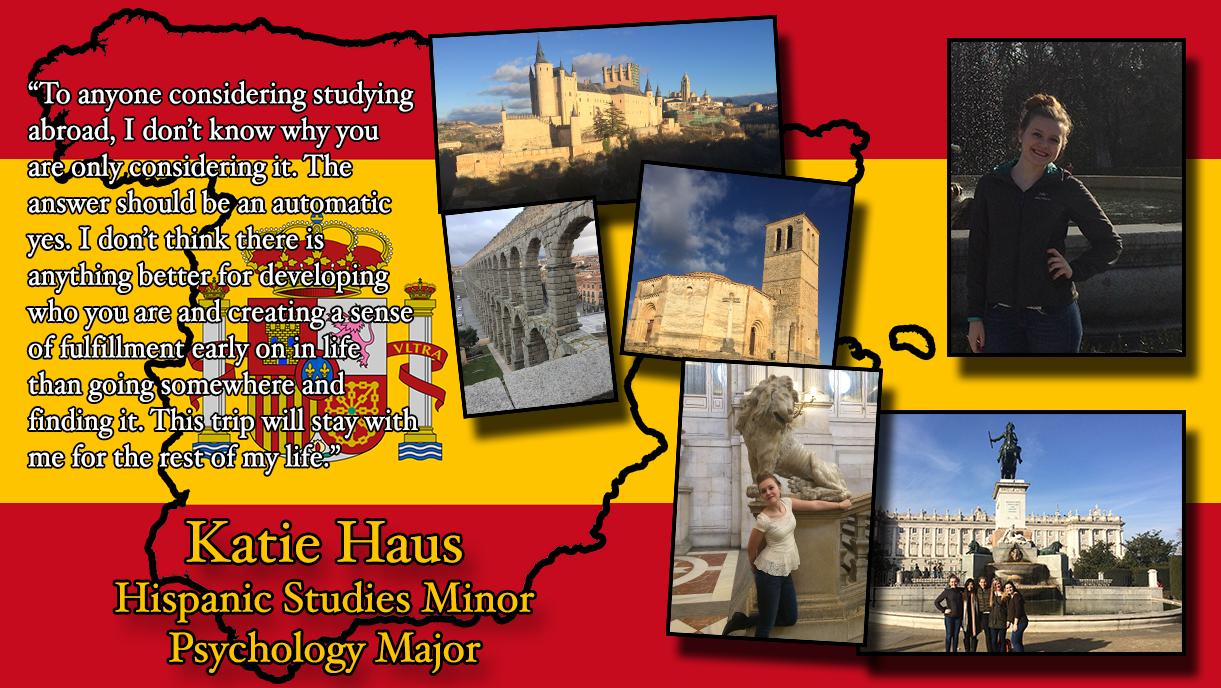 I am a Psychology major with a Hispanic Studies minor.

Where are you studying and how long will you be abroad?

I am studying abroad in Segovia, Spain for spring semester of this year.

The courses I am taking are psychology courses and one Spanish language course.

This early in the game, it is difficult to pick a memory when I know that there will be so many more, but I think right now it would be getting completely and absolutely lost my second week in. I am directionally challenged in the worst way, and I decided to go for a run. Needless to say, pandemonium ensued, and I managed to find my way back two hours later (with considerable help from google maps). I came out of it with self-assurance, another reason why people should never let me navigate, and a lot of lovely pictures of things I saw along the way, as well as something to laugh about.

To anyone considering studying abroad, I don’t know why you are only considering it. The answer should be an automatic yes. I don’t think there is anything better for developing who you are and creating a sense of fulfillment early on in life than going somewhere and finding it. This trip will stay with me for the rest of my life. I have met people from all corners of the world, seen things that many people have only read about, and I am living life in first-person. To me, these are things that outweigh any risks or costs. I urge you strongly to take the leap, and I promise you won’t regret it.

Choosing only one landmark is rather difficult, as this entire city looks like a fairy tale. I think that my favorite landmark would be either the Alcazar, which is a beautiful castle built high above the city, or the aqueduct, which is one of the signature landmarks of Segovia.

I am staying with a host family of four. My host parents have two sons, and we live in a one-floor flat right next to a plaza with statues, fountains, and an old church.

My greatest challenge while being abroad would be adjusting to the lifestyle here. Either that, or not having reasonably priced peanut butter. People meander slowly through the streets, go out around three times a week, eat dinner at 11 PM, eat a lot of seafood, and begin everything later than originally stated. Because the American culture is so different from things here, it was quite difficult to come to terms with all of that at once, and it took a little while. I am still lamenting the loss of my “skippy”, but I know that peanut butter will be there for me when I come home.

Skills that I have acquired so far include much better Spanish, proficiency in communicating through hand gestures and odd noises when words escape me, an improved sense of direction, and a lot more confidence in who I am and in my ability to rely on myself.

Study abroad has influenced my academic path for quite a while now. My family has hosted three exchange students, so for me, the question wasn’t really about going, it was about where I would go. The plans of studying abroad drew me to my minor, and I know the effects of studying abroad will sway my career path. Even if I end up in the U.S., I know I wouldn’t be able to get rid of my wanderlust, even if I wanted to. I will forever be looking for new adventures and the chance to see different places and meet new people.

A question I got quite often from the local residents was what kind of fish we eat in the U.S. I was forced to resort to a dictionary numerous times to look up walleye (leucoma) and various other types of fish. That one surprised me more than those who asked “¿Sentiste dolor cuando caíste?” or if I liked Segovia, which shouldn’t have been a question!