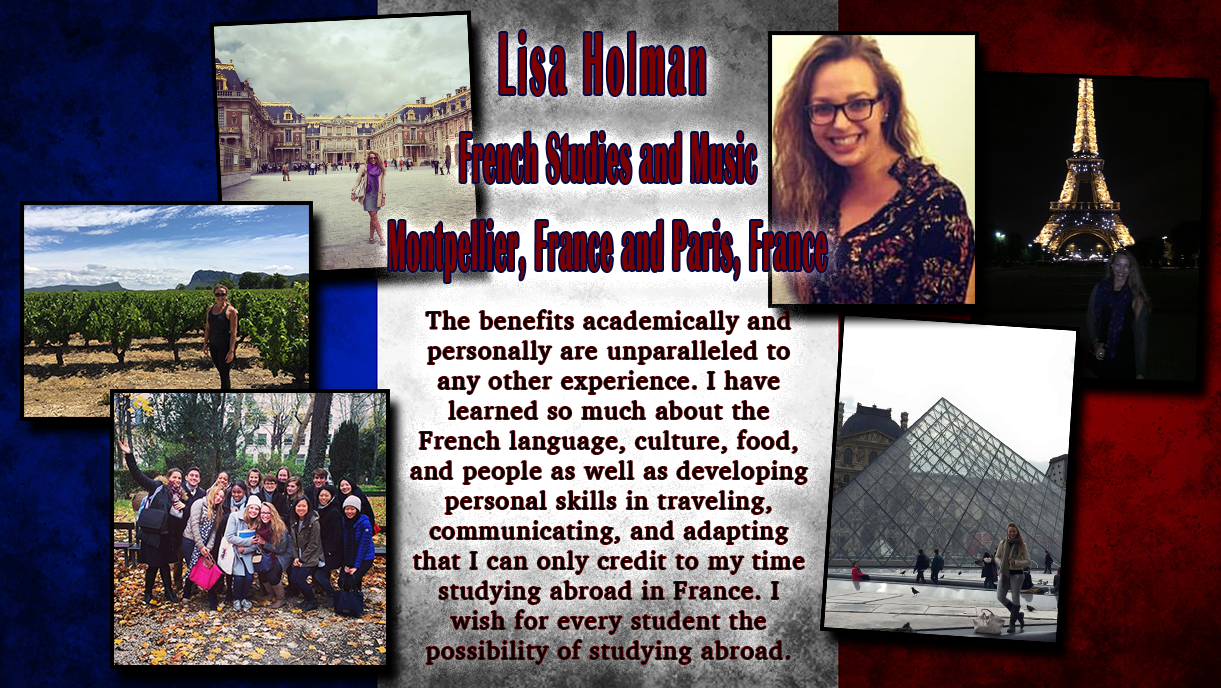 I am a double Bachelor of Arts Music and French Studies.

Where are you studying?

How long will you be abroad?

Collectively I studied abroad for five months participating in two separate study abroad programs. I was in Europe from July 18th to December 12th. The first program was through the University of Minnesota. I traveled to Montpellier, France where I took classes at the Paul Valéry University for five weeks. Following my time in the south of France, I then traveled to Paris where I studied for four months at the Catholic Institute through the American Institute of Foreign Study.

I took many different courses in French to fulfill my elective requirements at UMD. I took language and grammar classes along with a culture and gastronomy course and a French cinema course. I was also able to partake in voice lessons at La Schola Cantorum, a French Music Conservatory in Paris.

I have too many memories from my five months abroad to consider one my favorite; however, there are a few that remain engraved in my mind: spending time in the Musée de l'Orangerie where most of Monet’s paintings of the garden of Giverny are displayed, eating bread and cheese from some of the best bakeries in the city, walking through the gardens of Tuileries, Buttes-Chaumont, and Luxembourg, and exploring the Christmas Markets on the Champs-Élysées.

If someone were to consider traveling and studying abroad I would tell them do definitely do it. The benefits academically and personally are unparalleled to any other experience. I have learned so much about the French language, culture, food, and people as well as developing personal skills in traveling, communicating, and adapting that I can only credit to my time studying abroad in France. I wish for every student the possibility of studying abroad.

My favorite landmark in Paris is Notre Dame. There is so much beauty, history, and life in this one Parisian landmark. I attended a choral concert there where the Notre Dame adult professional choir sung many pieces which I have sung a part of UMD’s University singers. The ability of these singers along with the setting of the concert had me enraptured in the energy of the music. Located near the Latin Quarter, it was a popular place for my friends and I to walk by the river or eat at a café.

During both programs I lived with a host family. It was comforting knowing that I was able to come home to a home cooked meal and/or to a family-style home. I was able to communicate with my host parents when I needed advice, help, or just to practice my language skills. I really enjoyed being around people who were able to open up their home for me and make me feel welcome.

My greatest challenge while being abroad was adapting and growing while in a new culture. My aspiration during my time studying abroad was to feel and become a part of the French culture. It was a challenge in the sense that there is a lot of American culture influenced in France, especially Paris. During the moments when I wanted to practice my French and was responded to in English, I had to ignore the impulse to speak in English in order to carry on a quick conversation and continue in French.

I have developed many skills from my study abroad to France. Academically, I have furthered my French skills in writing, speaking, pronunciation, and comprehension. It was incredible how quickly I absorbed and expanded my knowledge each day while I was abroad. Personally, my independence, confidence, and problem-solving skills has grown immensely. I was able to make mistakes and learn from them while I was abroad giving me a sense of humility that I am now able to access while completing my French studies at UMD. The culture also helped me recognize the simple beauty that history and art can facilitate when given the chance to be noticed.

Study abroad has given me a more clear idea of what I would like to pursue in the near future. I plan to attend graduate school in the fall of 2017 to continue my studies in French as well as music.

Many local residents were curious how American culture in the Midwest compared to culture on the coasts. Many Parisians knew of New York and California, but did not recognize Minnesota when I stated where I went to school.