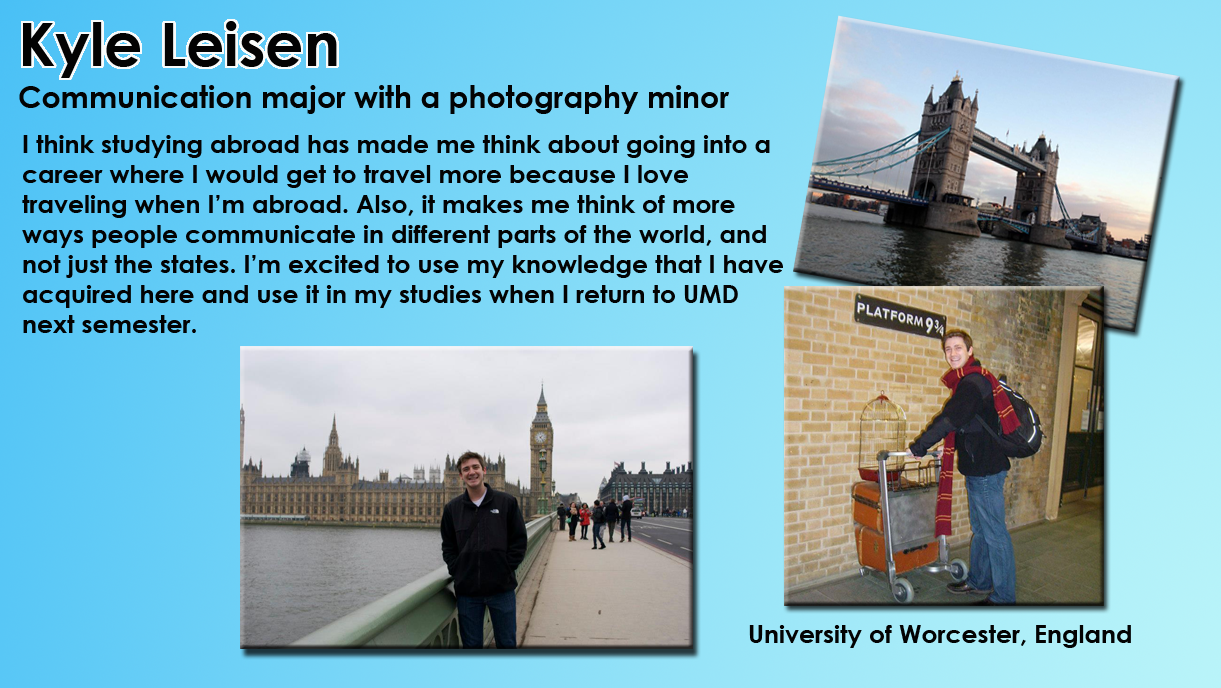 What’s your major and minor?
Communication Major and Photography Minor

Where did you study?
I’m studying in a town called Kingston upon Thames at Kingston University. It’s a 20 min train ride to central London, so I’m living in greater London. It’s like a suburb of London, and there are about 25,000 students that attend my school.

How long were you abroad?
I left January 16th and get back on June 8th, so almost 6 months.

What type of courses did you take?
My courses consist of communications and linguistics related classes. Some of them are Sociolinguistics, Global English, and Language in Context. I mostly learn about the way we communicate to others, the reasons why we use certain styles of language, and how we use communication in everyday life. I also take a course called British Life and Culture, which I learn about the British culture as well as go on field trips to landmarks in England like Parliament, Oxford University, and Stonehenge.

What did your program consist of doing?
I went through a program called GlobaLinks, and for the first 4 days I was in London, we went to a lot of landmarks and tours of popular attractions. We stayed in a hotel in London and then when that was over, we went to our University. As for school, my program consists of taking 4 courses for the semester, having a three-week Spring Break, and having a month for finals instead of a week. With that in mind, I get to have a lot of time to travel to other countries.

What is your favorite memory from your study abroad experience?
I think it would be making so many great friends as well as being able to live in such a historic place with so much to do and excitement. I really like the big city life, so London is great for that.

What was your favorite local landmark?
I think my favorite attraction in London has to be Big Ben. Even though I see it so often, I never get over the fact that I’m actually living in London. It’s really cool to see it up close and it’s so iconic in London.

What were your living accommodations?
My living accommodations consist of me living in a flat, or like dorm life back at UMD. I have 7 other flat mates that live on my floor. We all have our own room, which has a sink as well. We all share two toilets, two showers, and a kitchen as well. My classes are just a 7 min walk from my room, so it’s really convenient for me.

What was your greatest challenge while being abroad?
The greatest challenge for me is probably just adjusting to everything that is different compared to home. Things close earlier, using ways of communication with others, and dealing with money in the beginning. Now I’m used to all of it, but there are always some things that I miss like certain kinds of food, or just going for a drive by yourself.

What skills did you acquire abroad?
Some skills I have acquired are being more independent and taking more risks. Also, learning about public transportation more and using that all the time, which I actually like. I meet people easier because of my boost of confidence and make a lot of new friends.

Has study abroad influenced your academic/career path?
I think it has made me think about going into a career where I would get to travel more because I love traveling when I’m abroad. Also, it makes me think of more ways people communicate in different parts of the world, and not just the US. I’m excited to use my knowledge that I have acquired here and use it in my studies when I return to UMD next semester.

What are some questions you were asked by local residents?
A lot of residents ask me the differences between London and back home. They also ask me to say certain things when they find out that I’m from Minnesota, and they usually make fun of my accent, which is kind of funny. The people here are really friendly, and they like to meet people from different parts of the world.