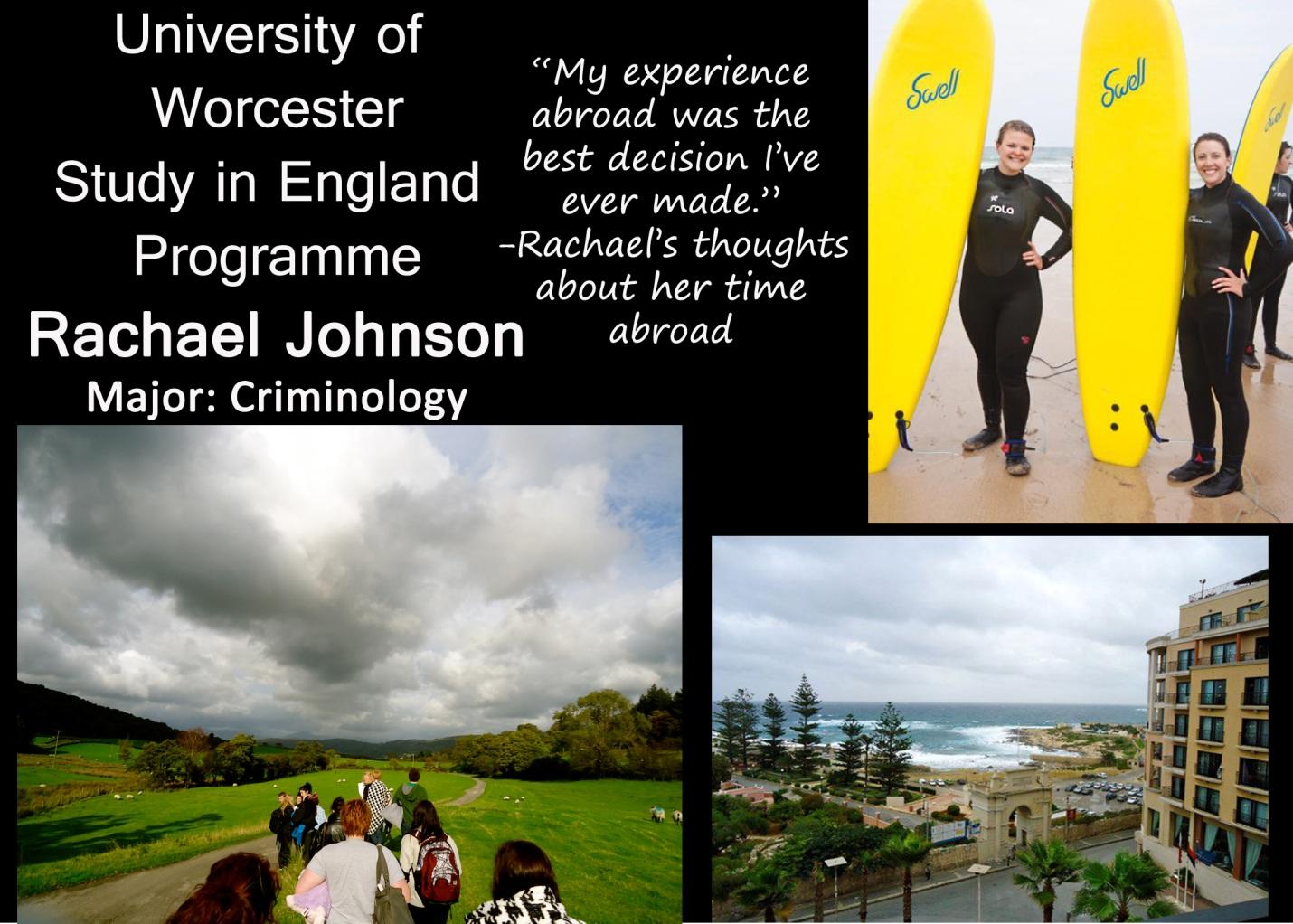 Where did you study?
I did the 9 month program in Worcester, England at the University of Worcester!

How long were you abroad?
Almost 9 amazing months.

What type of courses did you take? I was one of the lucky ones and most of my credits counted towards my major. I took some writing classes, music, Spanish, Shakespeare, a history class, and I even did my internship abroad.

What did your program consist of doing?]
This program sent 27 lovely UMD students to Worcester (but allows up to 50!). Every month, we typical had one weekend away trip together, and then one Friday we would have a day trip. Some of our trips included Wales, Scotland, The Lake District, cathedral tours, and several historical cities in England. We took half our classes at UoW and half were taught by UMD professors to help get credits that we needed. Many of us were involved with campus societies, myself and several others volunteered around town, and we all did traveling on our own.

What is your favorite memory from your study abroad experience?
All the trips that I went on! I was lucky enough to make it to England of course, but also 16 other countries while abroad on this program. I honestly couldn't tell you what was more memorable; the tour a few of us got of a Royal British Navy ship, having amazing hosts in Sweden, drinking Italian wine and eating thin crust pizza in Florence, or riding a camel in Morocco!

What would you say to someone considering studying abroad?
DO IT DO IT DO IT. If you're like me, and cost was a HUGE issue, don't worry too much about it. You will figure it out and you will get there. Look into all your options, decide if you want a short trip like a few weeks, a semester abroad, or a year like me. And then apply!

What was your favorite local landmark?
Men on horses! It became a game. Every time my friends and I would go on a trip, we'd see who could find a man on a horse first. They're literally in almost every country.

What were your living accommodations?
We lived in Platinum Plus flats at the UoW and they were absolutely amazing. We were each provided with our own good size room AND bathroom. We lived with one other American from the program and then 6 other flatmates typically from England, but sometimes from other countries. I had one flatmate from Dubai.

What was your greatest challenge while being abroad?
Money. The conversion rate of pounds to dollars was ridiculous and instead of paying $6 for a cheap meal, you're paying £6/$9! So it added up really quick. Getting a job also went along with this because it's extremely difficult in Worcester to find work. I was lucky enough to find a very part time position on campus, but it definitely didn't equal as much as I was using.

What skills did you acquire abroad?
I'm definitely more of an experienced traveler than I ever thought I could be. My time abroad was a time of many firsts. I rode the London Underground (subway/tube) for the first time and became a pro, I rode trains all of Europe, and I even flew on more plans than I'd ever imagined. I'm now extremely more confident in traveling and using public transportation.

Has study abroad influenced your academic/career path?
It has definitely made me want to go abroad again! Whether that is to work or even just travel. I wish I would have studied abroad earlier so I could do it again.

What are some questions you were asked by local residents?
What's America like? What state are you from? Where is that in the U.S? Do you like it hear? Are you Canadian? You sound like you'd be from Canada. What's the money look like? Are all American's really fat? Are the portions a ton bigger? And many many more!

Overall, my experience abroad was the best decision I've ever made. I looked into this program for a year before I applied because yes, I was nervous and I did not know how I would make it work, pay for it, and be gone for that long. In the end though, it worked out amazingly and I wouldn't take back the decision to go abroad. Even with all of the places that I went to, the world is huge and I've only hit a small portion of it! I honestly believe that everyone needs to experience culture abroad.