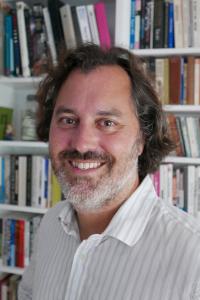 Scott Laderman joined the Department of History in 2005.  A specialist in the modern United States, his work broadly explores the various ways that Americans have encountered and ascribed meaning to the rest of the world.

His first book, Tours of Vietnam: War, Travel Guides, and Memory (Duke University Press, 2009), examines issues of tourism and memory in postcolonial Vietnam.  His second monograph, Empire in Waves: A Political History of Surfing (University of California Press, 2014), combines the passion for wave-riding he developed while growing up in California with his professional interest in the history of U.S. foreign relations.  His most recent book, The “Silent Majority” Speech: Richard Nixon, the Vietnam War, and the Origins of the New Right (Routledge, 2019), uses Nixon’s most famous presidential address to probe the last years of the war in Vietnam and the rise of the modern right-wing political movement.

Professor Laderman teaches courses in nineteenth- and twentieth-century U.S. history for the department, focusing especially on the global United States and the politics of popular culture.

The “Silent Majority” Speech: Richard Nixon, the Vietnam War, and the Origins of the New Right (Routledge, 2019)

Empire in Waves: A Political History of Surfing (University of California Press, 2014)

Four Decades On: Vietnam, the United States, and the Legacies of the Second Indochina War (Duke University Press, 2013) [Co-editor, with Edwin A. Martini]

Surfing is one of the world's most popular cultural phenomena. This short-term study-abroad class explores the intersections of surfing, tourism, and history, addressing how a pastime commonly associated with mindless pleasure has in fact been implicated in some of the major global developments of the last two-hundred years. As a program taught in Central America, the course also covers the history of U.S. foreign relations in that region. And it has an experiential component: to develop an appreciation for surfing and for why millions of people have planned their lives around it, you will learn to surf. The course thus combines academic instruction with outdoor education.

HISTORY 3320: American Popular Culture, 1929 to the Present
This course examines the intersection of the American popular arts -- especially film, music, the visual arts, and literature -- with national and international politics and American public life from the Great Depression to the present.
HISTORY 3386: The United States and the World since 1898
This course examines United States foreign relations -- political, economic, social, and cultural -- since 1898.
HISTORY 3396: The Vietnam War
This course examines the Vietnam War as a transformative event in both the United States and Vietnam. It covers the decades-long history of the conflict, and addresses its legacies in U.S. foreign relations, domestic politics and culture, and Vietnamese life.