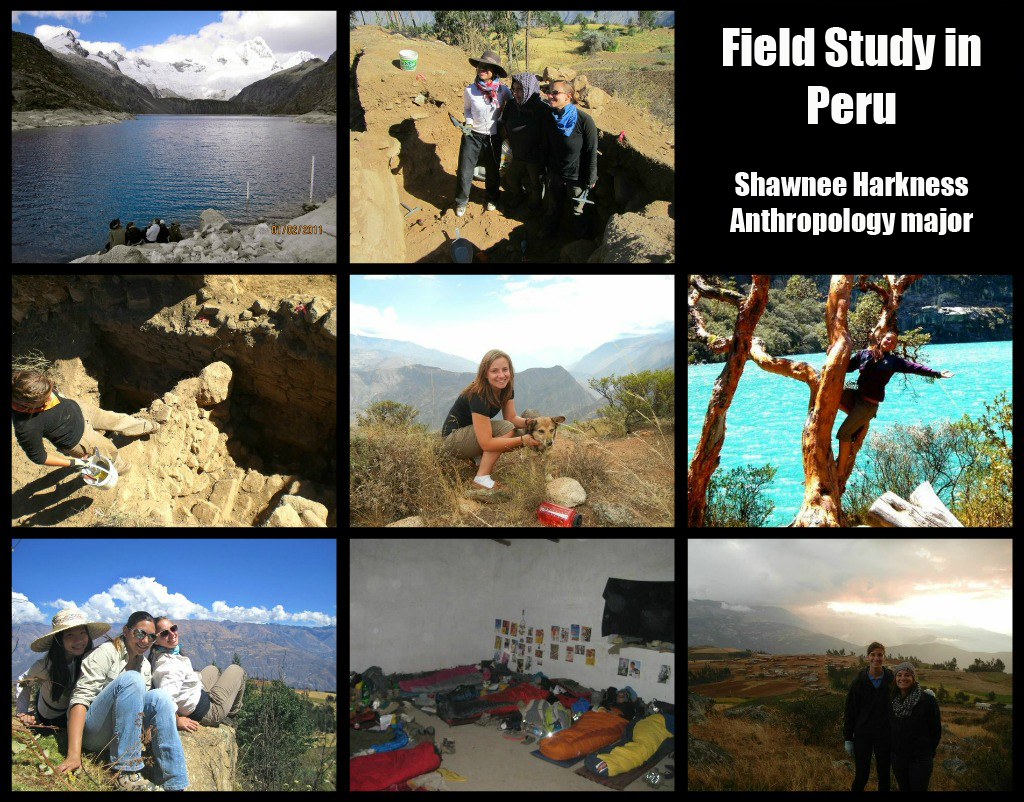 What is your major?
I am an Anthropology Major, Sociology Minor

Where did you study abroad, through what program/course, and how long were you there?
I Studied in Peru, mostly in the village of Hualcayon, but stayed for a short time in, Caraz, Huaraz, and Lima. I was there for a total of 6 weeks.

How did you choose the program you went on?
I chose this program because it seemed like the perfect opportunity to get involved in my field while offering 6 credits, much cheaper than all the other programs I researched. Also, you have to apply for the program and provide a letter of recommendation, so the program was not just for anyone who wanted to sign up.
What type of courses did you take?
Since it was a field study, everything we learned was based off of Andean Archeology, along with Andean history, and basics in Archeology.

What your favorite memory from your study abroad experience?
It is really hard to just pick one favorite memory from this experience but the one I am most proud of was when I participated in a 7 hour trek up the mountain to see a glacier lagoon. It was one of the hardest and most athletic things I have ever done, but when we reached our destination and saw so much incredible beauty, it was all worth it.

What would you say to someone considering studying abroad?
Just do it. You probably won’t miss too much while you’re away, and your life will be way more rounded and worldly because of it.

Outside of class what did you enjoy most?
I loved hanging out with the new friends I made while down there, I am actually planning on visiting a couple of the girls in New York for New Years.

What was your favorite local landmark?
My favorite landmark of Hualcayon was the waterfall, a couple of times a group of us would take a little hike every once and awhile just sit back and look out at the view.

What were your living accommodations?
For our living accommodations, there were two rooms in the towns community building, the biggest room for the girls, since there were more girls, and the smaller for the guys. For 4 weeks in the field we lived and slept in that building, there were no beds or blankets. We were required to bring a zero degree sleeping bag and a sleeping mat. Outside, were 2 out of only 3 toilets with pluming in the whole village and two outside showers (no hot water either). On the side of our building was a big sink, meant for doing laundry, brushing teeth, washing your face, and other such things.

What was your greatest challenge?
My greatest challenge of the trip was sleeping and waking up. During our summer it is their winter, and though the days in the sun were warm and it did not snow, the nights would get down to 10 degrees and none of the houses there were heated, so the worst part of the day was waking up early before the sun fully rose and having to get out of your sleeping bag and into the cold air.

What skills do you acquire abroad?
While abroad, I definitely learned how to be alone and become more independent and confident when traveling. I learned how to communicate with different people on a more cultural level.

Has study abroad influenced your academic/career path?
Studying abroad, defiantly reaffirmed my career path, I had known I wanted to do field work for my job but I had never done it before. Though I think I would still see myself as becoming more of a Cultural Anthropologist than an Archeologist, I still felt like going to Peru for this dig was one of the best experiences of my life.

What were questions you were commonly asked by local residents?
Many of the questions I was asked while being there was about our own customs and how we would do something compared to them, and the children would mostly just asked us how to say a Spanish would in English and giggle.