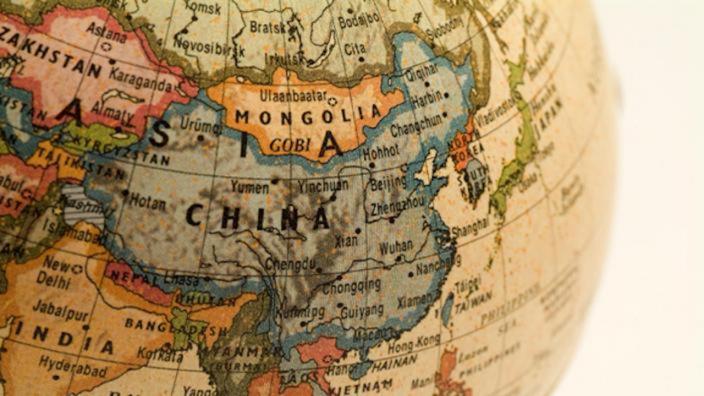 After studying abroad, one student's love for China is confirmed.

When Kongmeng graduated from Champlin Park High School in Brooklyn Park, Minn., he had no idea that just a few years later he would be buying lunch from tiny noodle shops and climbing Tibetan mountain ranges. 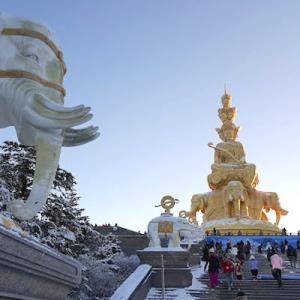 Visitors climb to the top of the Mount Emei at dawn to see the Golden Buddha shine in the sunlight. It is said the light will protect you.

“Living in Chengdu is amazing,” said Kongmeng Vang, a UMD junior with a double major in environmental science and international studies.

He came to UMD to study environmental and water issues and then his world began to grow. He added the international studies major and started taking classes in Chinese, just for fun. When the opportunity to study in China was presented, he couldn't pass it up.

After six months studying in China, Kongmeng has the travel bug... bad. He still wants to work in an environmental field but that dream has changed. Now he's considering a position with a company out of the U.S. after he graduates in 2018. 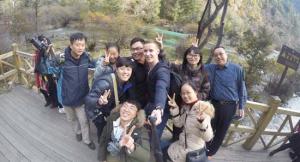 Kongmeng and his classmates visit the Jiuzhai Valley National Park. (Kongmeng is in the center of the group, back row, wearing glasses.)

His Chinese language classes at UMD made his transition from UMD to Sichuan University in August 2015 fairly easy. He’s made friends and done lots of exploring, not just in Chengdu, but also in some of the more remote and pristine nature sites in the world.

THE CITY
Chengdu is the capital city of the Sichuan Province and it’s big: 4.3 million people. It’s home to new high-tech corporations and lots of young people. Kongmeng’s new friends have introduced him to the Chinese-style of relaxing in the evenings and on the weekends.

“There are tons of places to chat with friends, drink coffee, or play video games,” Kongmeng said. “People go shopping and just hangout.” He and his friends often go to clubs and sing in karaoke places. 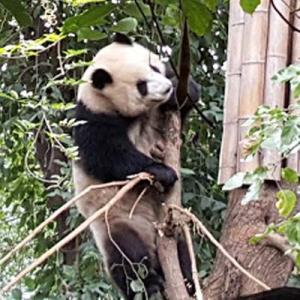 A panda in the Chengdu panda research center.

Old people in Chengdu love playing Mahjong and card games. "Sometimes they simply put a board on a motorcycle to play card games," Kongmeng said. "After a few minutes, people gather around to watch their games. Sometimes a big crowd will gather."

Kongmeng has made sure to see some of the historic towns and temples, too. “Generally, life is relaxed in Chengdu; people are very happy and have nothing to complain about,” said Kongmeng. However, there is one thing that bothers Kongmeng, the air pollution.

GETTING AROUND IN THE CITY
While social life is fairly low-key, Kongmeng had to learn an entirely different way to navigate in a city.

“There is no ‘Minnesota nice’ in Chengdu,” Kongmeng smiled. When he walks on the street, people won’t let him pass; they just walk into him. He quickly learned that it is strange to say “Hi” to people on the street or even at school.

Kongmeng says, “Never drive a car in Chengdu; it is too crazy.” Big traffic jams occur every day, and pedestrians, cars, and bicycles don’t follow any rules.

Kongmeng doesn’t mind, because public transportation is convenient and cheap. It only costs two to three dollars to take taxi wherever he wants. He has a warning, though. "If you are taking the bus, you need to be careful. Due to the large population, the buses are very crowded,” Kongmeng said. “When you get on, you need to squeeze in and find a spot to sit, fast." 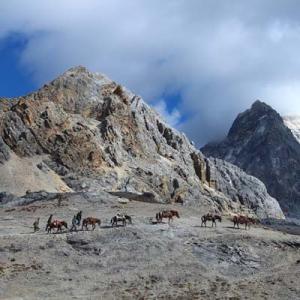 A view of people and their horses taken while hiking in the Tibet region.

OUTSIDE CHENGDU
Kongmeng brought his love of the outdoors to China. He’s taken several hiking trips already. His first trip was to Mount Emei, one of the four sacred Buddhist mountains of China. He’s been to Lijiang, a historic city, where he found a maze of cobbled streets and canals.

He’s also camped and hiked in Daocheng and Yading, in the mountainous regions southwest of Chengdu. When Kongmeng and his friends got off the bus there, they had a hard time breathing, as the altitude was over 14,500 feet above sea level.

He does not know when he will get back to China again, so he is traveling as much as he can. On school break, in January 2016, he went to Tiger Leap Gorge, arguably the most spectacular hiking trail on the planet, for the “hardest and most beautiful hike of my life.”

Kongmeng is not sure what he can fit in while he's attending his remaining classes, but he's determined to see even more of China.