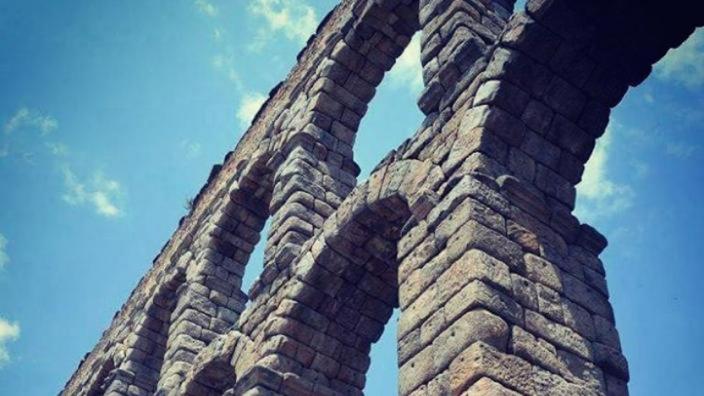 "I'm taking a class on the art in Spain and it's opening my eyes,” says Anna Casperson. “There is so much history. We’ve seen palaces, climbed bell towers, and seen ancient stained-glass. It’s amazing and incredible.”

Anna is one of 26 UMD students studying Spanish in Salamanca, Spain, for the month of June. The students take language classes and electives to get a full language and culture experience.

The students study at the ancient University of Salamanca during the week but it isn’t about tourism. The classes are rigorous, and each student lives with a host family. 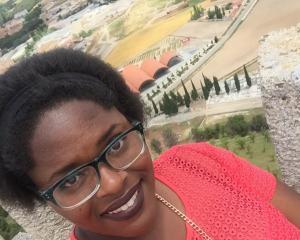 Ebony Hearst on the ramparts of Castillo de Cuellar.

Ebony Hearst on the ramparts of Castillo de Cuellar.

HOW DO YOU SAY IT IN SPANISH?

“Once I made American tacos for my host family,” says Ebony Hearst, a pre-medicine student studying Hispanic studies. “They don’t make them in Spain. I wanted my host mom to buy ground beef at the grocery store but I didn't know the word in Spanish. I said ‘meat’ and ‘cow’ and ‘small pieces.’ When I saw what she bought, we laughed so hard because the package was labeled hamburger."

Marissa Wheeler, a double major in biochemistry and molecular biology and Hispanic studies says, "I was nervous my Spanish wasn't going to be good enough." But after getting off the bus and meeting her host family, Marissa was relieved to find they could communicate just fine.

“Every day I join my family for the midday meal,” says Marissa. “It takes an hour and half.” The whole family gathers, sometimes aunts or cousins join the group. “We sit and eat and talk. We talk about everything. Once we even had a long discussion about nude beaches.”

After Marissa’s host family eats, they turn on the television. “We have fun watching the makeover shows… house makeovers and fashion makeovers, especially. And then we joke about what they did right and what they did wrong.”

Abby Coyle, who is majoring in cell and molecular biology with a Spanish minor, loves the food. “My host mom make the most wonderful paella,” Abby says. The dish is made from rice, seafood, chicken, and vegetables, all cooked in one pan. “The oils are flavorful and they are used for dressings,” Abby says. “Oil is the dressing for pasta salads and lettuce salads, too. Forget Ranch dressing.”

Abby with a plate of paella made by her host mother.

Anna at the top of the Cathedral in Salamanca's bell tower. 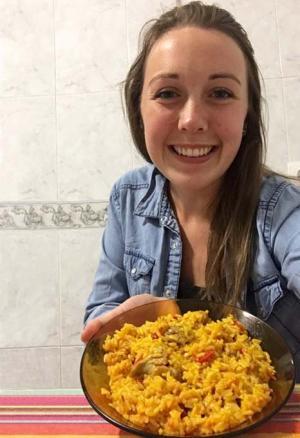 Abby with a plate of paella made by her host mother.

Anna, a double major in psychology and Hispanic studies, says, “There's a certain openness that's unlike anything I've ever experienced. My host mom is not afraid to talk about anything.”

“Each time you see someone, they kiss you twice — once on each cheek.” Anna says there's a lot of public affection. "People walk hand-in-hand, they walk arm in arm, and they kiss a lot."

“It's nothing like you'd see in United States," she says. "Sometimes when you walk down the street you have to walk around a couple because they are totally making out on the middle of the sidewalk.”

Once Ebony’s host mom asked questions about politics.  “She wanted me to explain the U.S. political system and tell her about the political parties.”

“I've had eight years of Spanish, and I still didn't know every word,” says Ebony. “But all my classwork came in handy. I just started describing the situations using words I did know, and it worked.”

Anna at the top of the Cathedral in Salamanca's bell tower.

Marissa in Plaza Mayor, the central plaza of Salamanca.

All four young women felt there was something very different about the people in Salamanca. “They're accepting, and they want to really learn about you. Random people I've met on the street genuinely want to talk to me,” says Ebony. 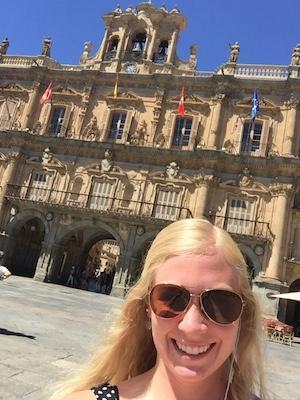 Marissa in Plaza Mayor, the central plaza of Salamanca.

“It's much more relaxed here,” says Abby. For instance, it’s impossible to buy a cup of coffee and get it to go. “Every day we sit and talk at the coffee shop.”

Milagros Gomez is one of the program leaders along with Ana Maria Ferreira. Both are assistant professors in the UMD Department of Foreign Languages and Literature.

Milagros is pleased the trip is going so well. “I feel like the students are blooming here,” she says. “They were so shy in class at UMD. It's amazing to see the changes.”

The Salamanca Study Abroad Program is a 6-credit course where students study the Spanish language for two hours a day. They also choose two one-hour elective courses from a variety of topics: history, art, cinema, conversation, etc. Outside of the classroom, the UMD professors offer full immersion by teaching architecture, European history, Spanish history, culture, religion, and many additional topics.