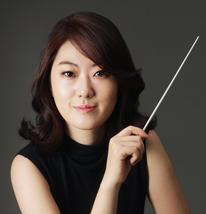 Hye Youn Jang is thrilled to be joining the faculty at the University of Minnesota Duluth for the 2020-2021 season. Passionate about inspiring the next generation of musicians, she has served as Visiting Orchestra Director at the College of Saint Benedict and Saint John’s University and as Conductor of the Dubuque Symphony Youth Orchestra. She also was a faculty member at the Florida Southern College String Camp in the summers of 2018 and 2019.

Born in Busan and raised in Seoul, South Korea, Ms. Jang began her music studies by learning violin and piano. She also holds a Master’s in Orchestral Conducting from the University of Iowa and further still, she achieved a DMA in Orchestra Conducting from the University of North Texas. Ms. Jang has studied with famous conductors, including tutorials with Larry Rachleff, Kenneth Kiesler, Andrew Constantine, Gerard Schwarz, Octavio Más-Arocas and Cristian Macelaru. Her conducting is influenced by David Itkin, Ki-sun Sung, and William LaRue Jones.