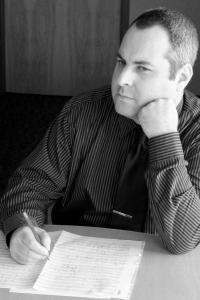 Dr. Justin Rubin is Professor of Music and Chair of the Composition and Theory Program at the University of Minnesota Duluth and Artistic Director of the UMD New Music Festival. Rubin released his first solo CD, Nostalgia (Innova 738), in 2009 that included his chamber works featuring the bassoon.  Exceptional critical reception led to the publication of subsequent recordings in 2011 - Constellations (MSR 1398), 2013 -  A Waltz Through the Vapor (Innova 847), and 2015 - Currents (Centaur 3410).

In 2009 he was inducted into the Academy of Distinguished Teachers that represents the highest recognition by the University of its most distinguished scholar-teachers and in 2014 he was additionally honored with the Tezla Teacher/Scholar Award.  A graduate of the Manhattan School of Music, Purchase College (New York), and the University of Arizona, Rubin is also active as a performer on organ and piano.  His diverse concert repertoire and musicological concerns (ranging from Buxtehude and Schubert to Sorabji and Xenakis) has informed an eclectic compositional style, fusing a renewed perspective on traditional tonal structures with a command of contemporary techniques built on a foundation of improvisation and intuitive processes.

His works have been performed by the Minnesota Orchestra, the Minnesota Sinfonia, as well as numerous chamber ensembles throughout the United States and internationally.  In addition Rubin's collaborative efforts in the realm of multimedia/music and video have been recognized through presentations by the Visual Music Marathon series at Northeastern University and grants from the Institute for Advanced Study and the McKnight Foundation.