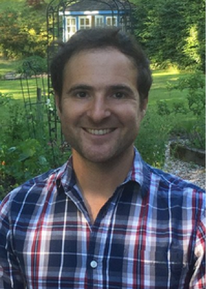 Gideon Mailer came to the University of Minnesota system from the University of Cambridge, UK. From 2008-2012 he was an elected Title A Fellow of St John’s College, University of Cambridge, where he lectured and supervised in American and Atlantic history and in the history of intellectual thought. Before his Junior Research Fellowship at St. John’s, Cambridge, he took his PhD (2008), MA, and BA (hons) (Double-First Class) from Cambridge. His research focuses on: the social, intellectual, constitutional, ecological, and religious history of North America and the wider Atlantic World from 1600-1865; the impact of the Scottish Enlightenment on the American Founding and later American history; the evolutionary interaction between nutrition and immunity and its impact in North America; the contribution of Early American Studies and Indigenous history to Comparative Genocide Studies and Holocaust Studies.

On the relationship between piety, enlightenment thought, and political unionism from the colonial era through to the American Revolution. Witherspoon was the only clergyman to sign the American Declaration of Independence.

“…this is intellectual and cultural history of a high order…a reminder that the eighteenth century in general, and the Revolutionary era in particular, saw a balancing act between twin impulses of the time, one philosophical, another religious—and both political.” --Reviews in American History

“…a compelling case…a lens through which to more accurately gauge the interplay of religious conflict and Enlightenment philosophy in the founding of the United States.” --American Historical Review

“Mailer’s tour de force of research has produced a cornucopia of insights into a key but underappreciated leader of the eighteenth-century Atlantic world...” --Mark A. Noll, University of Notre Dame

“Mailer explores the rich philosophical origins of the Revolutionary War, American education, and the United States’s distinctive civil religion….This work transforms our understanding of the only minister to sign the Declaration of Independence and his most influential student, James Madison.” --Kate Carté Engel, Southern Methodist University

“...Mailer provides new clarity on the relation of religion and politics at the founding..." --Journal of Church and State

“…In this thoroughly researched and sophisticated book, Mailer cuts against the grain of recent scholarship...” -- First Things: American's Most Influential Journal on Religion and Public Life

“This is early American intellectual history at its best..” --New Jersey Studies

“It is no mean  feat to provide a significant contribution to the scholarly conversation on the American Revolution.” -- Journal of Presbyterian History

“Mailer writes eloquently and clearly concerning these complex interactions between evangelical devotion and Scottish enlightenment philosophy, and in doing so, illuminates the character, philosophy, and piety of his subject...Throughout, Mailer's scholarship, prose, and organization are exemplary.” -- Journal of Scottish Philosophy

“This thoroughly researched work is best suited for scholars of Enlightenment history and the American Revolution.” --Library Journal

(2) Decolonizing the Diet: Nutrition, Immunity, and the Warning from Early America (London and New York, 2018) (with N.E. Hale) 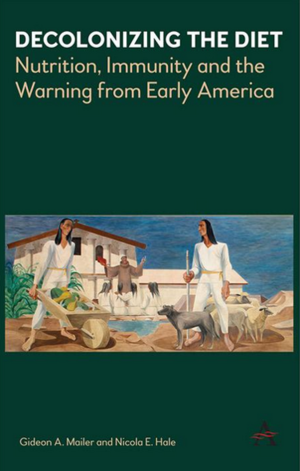 Comparing the European transition from Paleolithic hunting and gathering with Native American subsistence strategies before and after 1492, the book offers a new way of understanding the link between biology, ecology, and history. After examining the history and bioarchaeology of ancient Europe, the ancient Near East, ancient Native America, and Europe during the medieval Black Death, it sets out to understand the subsequent collision between indigenous peoples and Europeans in North America from 1492 to the present day. Synthesizing the science of nutrition, immunity, and evolutionary genetics with a new history of indigenous North America, Decolonizing the Diet highlights a fundamental model of demographic destruction: Human populations have been able to recover from mass epidemics within a century, whatever their genetic heritage. They fail to recover from epidemics when their ability to hunt, gather, and farm nutritionally dense plants and animals is diminished by war, colonization, and cultural destruction. The history of Native America before and after 1492 clearly shows that biological immunity is contingent on historical context; not least in relation to the protection or destruction of long-evolved nutritional building blocks that underlie human immunity.

“Mailer and Hale provide a powerful critique of Virgin Soil theory and its claim that epidemics were the inevitable consequence of European colonization. Drawing on cutting-edge nutrition science, immunology, and archeology, they conclusively demonstrate how the chaos of encounter disrupted American Indian agriculture, triggered widespread malnutrition and left Indians susceptible to dire mortality."  --David S. Jones, A. Bernard Ackerman Professor of the Culture of Medicine, Faculty of Arts and Sciences and the Faculty of Medicine, Harvard University

"Mailer and Hale challenge us to consider how colonization’s multiple consequences—dietary changes, diseases, and settler invasions—resulted in long-term problems for Indigenous Peoples. Based on cutting-edge research on nutrition, immunity and ethnohistory, Decolonizing the Diet offers a fascinating analysis that both illuminates the past and informs the present." --Paul Kelton, Professor of History and Robert David Lion Gardiner Chair, Department of History, State University of New York, Stony Brook

“A historian and a scientist, respectively, Mailer and Hale manage to weave together a cohesive narrative of how the forces of nutrition, immunity, environmental change, disease, settler colonialism, and many other tangential factors have influenced the general health of Native American people, from the Paleolithic and Neolithic eras to the present.” --Chelsey Luger, Turtle Mountain Chippewa / Standing Rock Sioux 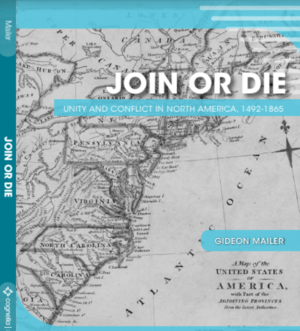 (4) The Character of Freedom: Slavery and the Splintering of American Moral Philosophy from the Colonial to the Antebellum Era.

This working project builds on research which I have begun to synthesize, and which can be found in two forthcoming articles. It assesses the relationship between American moral philosophy (particularly as inspired by Scottish Enlightenment and Scottish Presbyterian thought) and slavery from the colonial era, through the American Revolution, and into the antebellum period.

This course studies the social and political values, ideas, and experiences of colonial and revolutionary America that underlay the eventual formation of the United States. Particular attention is given to the different ways in which American settlers and indigenous peoples from varying social and ideological contexts reconceived their own past history/histories.

Examines the history of religion, in all its forms, during the period of Colonial America and the American Revolution.  Special attention is given to the role of religion in the social and political changes of the colonies.

Examines the history of the Civil War and its causes, the history of slavery and the lives of enslaved Africans in America, the lives of African Americans, the constitutional argument over the nature of American liberty, the expansion of the union during the nineteenth century, and the career of Abraham Lincoln.

This course is unique in its joint appeal to students of history and student of biology, as well students from other related fields in the humanities and the sciences. Students will be exposed to cutting-edge research linking the study of early American history, American Indian history, the history of American ecology, modern nutritional science, and the development of immunity to disease. Students will be required to understand the ways in which published scientific data and research can inform historical case studies of the encounter between colonial Americans, American Indians, and European from the fifteenth century to the twentieth century – and vice versa. Students will be introduced to contemporary debates on the relationship between nutritional science and human immunity, using the to understand the history of colonial American and American Indian health, farming, hunting, and ecology following European contact. These histories, in turn, will illuminate their reading of scientific papers and research.

Evolution of the United States from colonial origins into a modern nation.  Frontier and agrarian heritage, constitutional development, emergence of modern U.S. political system, expansion of democracy, and cultural diversity. Colonial period to 1877.