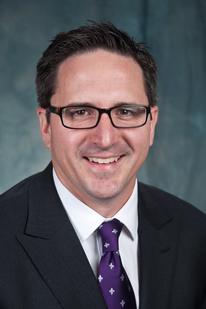 I am originally from Aurora, Colorado, but have now lived most of my life in other places. After graduating from Smoky Hill High School in 1993, I attended the University of Wyoming where I competed on the Men’s Swimming team. I have since lived in England, Wyoming, and Texas, before moving to Minnesota in 2005.

I graduated from the University of Wyoming in 1999, majoring in Communications & Mass Media. While in Texas, I completed my M.A. and Ph.D. in Rhetoric & Public Affairs at Texas A&M University in College Station. My dissertation explored the rhetoric of economic arguments, especially arguments in favor of free markets, and their relation to ethics and religion.

As a professor of rhetoric and public affairs, the classes I teach are at the nexus of politics, history, and philosophy. I regularly teach Philosophy & Rhetoric (COMM 3610), a course on self-awareness and the four cardinal virtues; Analysis of Public Discourse (COMM 3615), a survey of American speeches; Rhetoric of Globalization (COMM 3625), a course on global political economy and the possibilities of global civil society; History of Rhetoric (COMM 4500), a survey of rhetorical theory from ancient to modern times; and Senior Seminar (COMM 5000), which alternates topics between the Scottish Enlightenment and Stoic Rhetoric. Although there are a variety of issues discussed within these courses, the most common and recurring themes are those things which pertain to citizenship. My goal is to prepare students to capably discuss public matters. I am always open to discussing my courses so please feel free to drop by or inquire by email if you have questions.

My research interests revolve around the theory and history of rhetoric, with special emphasis on political economy and constitutional theory. I have another ongoing interest in the rhetoric of religion and prophecy in nineteenth century America. These interests have led to a number of projects including work on the Scottish moral philosophers David Hume and Adam Smith, as well as the Mormon founder Joseph Smith. More recently I have been working on a project related to regime types and constitutional cycles. I strive in my work to connect theories and ideas about communities to what it means to live a good life.

In addition to my academic work, I enjoy reading, swimming, biking, weightlifting, basketball, and writing with fountain pens. Kathy Foti Gore, R.Ph. and I are the parents of five children.