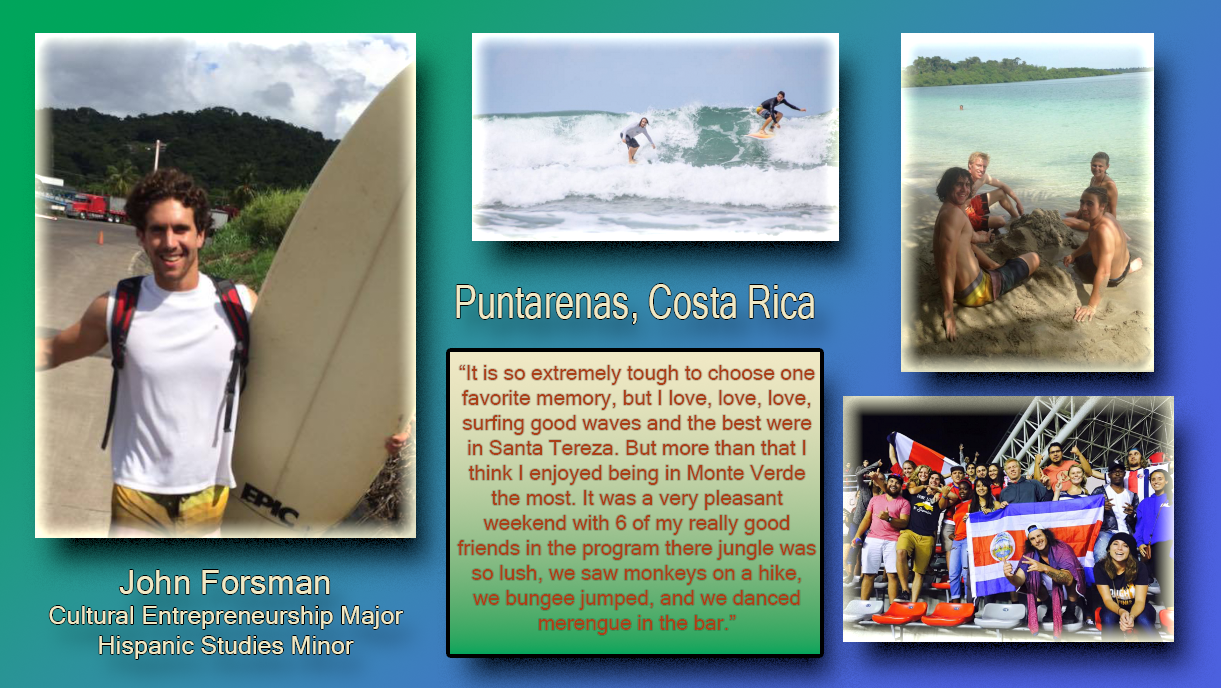 My major is Cultural entrepreneurship with a minor in Hispanic Studies

Where are you studying?

How long will you be abroad?

I am doing 1 semester, which started August 14th and goes until December 3rd. Then my two friends and I will be traveling around CR and Nicaragua until the 21st of December.

All the courses are Spanish based to finish my Spanish minor. There is an intensive grammar class. I have a conversation class, and literature and short story. As electives I am taking Spanish dance, which is very important to know in the culture of Costa Rica and almost all places in Latin America. We learn Bachata, Salsa, Cumbia, Chachácha, and Merengue. Finally a surf class.

It is so extremely tough to choose one but I love, love, love, surfing good waves and the best were in Santa Tereza. But more than that I think I enjoyed being in Monte Verde the most. It was a very pleasant weekend with 6 of my really good friends in the program there jungle was so lush, we saw monkeys on a hike, we bungee jumped, we danced merengue in the bar.

The idea scared me at first and even when I was going and when I met my host family and had to use Spanish for the first time in my life outside of class. It was like a crazy mix of anxiety and excitement. But it is amazing to settle in to another country and way of life. Things synchronize quickly and I have learned sooo much Spanish. I have more than doubled my vocabulary, which is a lot because I’ve been in Spanish classes for 2 years and took my first upper division course the semester before I came here, infinitely increased confidence in talking to people in Spanish and in general, and I have had the chance to view the world from another culture's perspective. This is increasingly valuable in our world. It has sparked in me a love for traveling and language, and also surfing. I kid you not surfing is an important part of my life here and it is something I will continue to pursue. All these skills and experiences I’ve acquired are important to me now.

In Puntarenas my favorite place is called “la playa” which is a liquor store. I know that sounds terrible but this was the gathering place for all the gringos and ticos (the students abroad and locals costa ricans) it was situated along the beach right by a ferry port so you could see the ferries coming in, watch the sunset, the beach and ocean were right behind with the mountains of the Nicoya Peninsula off in the distance. We would gather here at least twice a week to talk amongst each other and locals, drink some beer, practice Spanish, and teach them English, listen to music. It was ideal.

They are basic but so perfect. I have a room with a single bed, I get 3 meals a day cooked from my host dad who I spent all my meals with. He is quiet but we got to know each other well throughout the semester and he is a beautiful soul and has the best smile I’ve ever seen. He also has 3 daughters that live nearby so the house is bustling often yet I have plenty of privacy. It’s simple yet everything you need. There are no huge houses or air conditioning, which is kind of tough because it’s always 90 degrees down here, haha. But I had everything I needed. Then I brought minimal, a laptop, a week and half’s worth of clothes, a few books, and bathroom supplies.

I think in Costa Rica the greatest challenge would have been the first few days with the host family. I couldn’t speak so well or at least I didn't have confidence in my abilities. I felt out of place and I didn’t know the people in my group that closely just yet. So it felt weird but then after a month or so I made some of the closest friends as ever and we’ve traveled this marvelous country together knowing pure bliss and great discomfort together. My Spanish has remarkably improved and it’s amazing how settled in you get. The thought of living here crosses my mind now. But I know if I can have this feeling for Costa Rica I probably can for other countries, cities, and continents as well so I don’t want to end my travels here.

As I have said speaking Spanish is a skill I boast confidence in now. I can understand very well and speak very well. Speaking, listening, and writing in Spanish have dramatically improved and it has built confidence in my speaking in general and getting my point across in English as well. Because in Spanish it is always a struggle to get one’s point across but you have to push for it or you won’t be able to converse with people. I’ve gained independence in traveling alone and with friends; I know how to make my way around by talking to strangers and asking for help. I know to get a variety of answers before making a move or getting on a bus. I’m more confident in approaching strangers now and I have more confidence in people knowing that they are almost always willing to help. I’m a better sharer, better at living with less. More comfortable in my own skin and I trust more in my abilities to learn and connect with people. These 4 months have been an incredible growth spurt emotionally, psychologically, spiritually. This experience hits many areas that just going to class doesn’t touch.

It is hard to say because before study abroad I never had a distinct career path. Today I still don’t but my skills and confidence have broadened. I’m now interested in working abroad and I feel that is an option for me I’d really like to do that. Academically I’m much more interested in Spanish now.

I have had too many conversations to count with local residents. We talk about everything from politics, to dreams for our lives, morals, and differences in our countries. Often they would ask what “gringos” thought of Costa Rica, and what did I think of Costa Rica before I came here. I would tell them it really depends. Some gringos think I’m on an island. Then others will give me a list of things I need to see. Either way I think we have the idea that Costa Rica is a sort of tropical paradise. Which I would argue that it is, I mean you have beautiful oceans on both sides within six hours of each other and mountains in between. Beautiful wildlife, monkeys are common to see here.

Any additional stories or comments are welcome.

I studied with a program called USAC and it is a good program and great staff. They take you on some magnificent trips around the country. I have come to love the people here at USAC, my class and staff. The program is a little cheaper than an average semester at UMD. It is not the most immersive experience there because the gringo students have their own building, which is not attached to any local university. That being said they do a few programs with local universities, which are fantastic ways to meet people. It is easy to get to know people outside of class, playing soccer, basketball, surfing, in bars, or whatever is your thing.

ONE more memory that might be my favorite is going to the soccer game of Nicaragua vs. Costa Rica. We arranged that shit and got USAC to get us all a bus and the staff got tickets and we made it to this awesome stadium in downtown San José and there were so many people. The energy in the air was electric. The photo is the one of the big group and we’re holding up multiple flags.

Also we visited Bocas del Toro in Panama, which is one of the most beautiful places I’ve ever been in my life. I’m so very lucky for that experience.