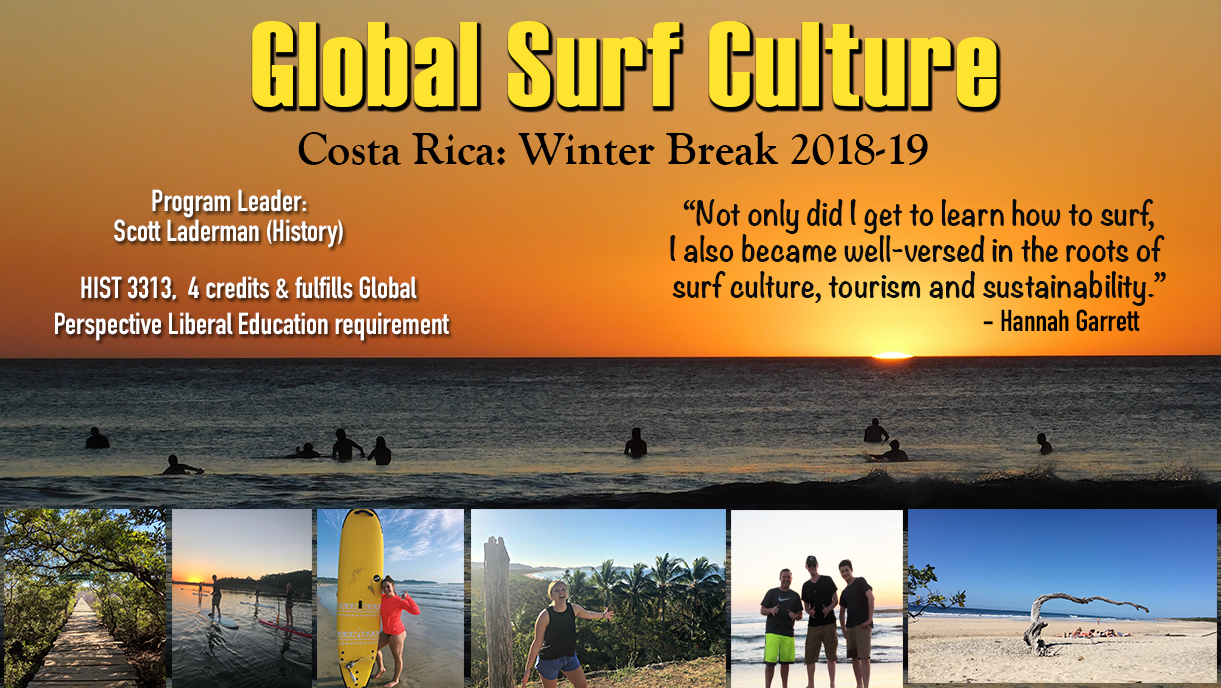 About the Class
Surfing is one of the world’s most popular cultural phenomena.  While the number of actual surfers is relatively small – probably between five and ten million people – the sport’s reach has historically extended far beyond the limited community of wave riders, influencing everything from fashion and music to film, photography, tourism, and corporate marketing.

This class explored the intersections of surfing, American power, and tourism, addressing how a pastime commonly associated with mindless pleasure has in fact been implicated in some of the major global developments of the last two-hundred years.  These include empire-building and the “civilizing mission” in nineteenth- and early-twentieth-century Hawai‘i, modernization and economic development in the so-called Third World, the growth of international tourism following the Second World War, political mass movements and the antiapartheid struggle, American foreign relations and Cold War cultural diplomacy, and the surf industry and corporate globalization.

Given the class’s setting in Costa Rica, we also addressed U.S. foreign policy in Central America and the more recent development of Costa Rican surf tourism.

And the course had a fun experiential component: to develop an appreciation for the subject and for why millions of people have planned their lives around the sport, the students learned to surf!  The course thus combined academic instruction with outdoor education.

Who, What, Where
The program, which had eleven students, moved between Nosara/Playa Guiones, Playa Avellanas, and Playa Grande.  Nosara is an attractive town with a lot of restaurants, yoga studios, and surf shops and a beautiful, long beach with great waves that are perfect for learning to surf.  The students loved it there.  Playa Avellanas, which is in a much more remote area, features all sorts of wildlife (mango trees full of howler monkeys, lots of iguanas, and colorful, beautiful birds) and great surf, which, given the waves' size, proved ideal for the UMD students.  Playa Grande is a bit north of the popular tourist town of Tamarindo (which the students had an opportunity to visit).  It has an attractive beach and great food, and its spectacular sunsets are second to none.

In each location the students spent their days surfing, studying, and enjoying numerous activities.  These included a SUP (stand-up paddleboard) tour on the Rio Nosara to a deserted black-sand beach, participating in coastal tree planting, and racing down a mountain on a series of zip lines through and above the jungle canopy.  Unfortunately, the Olive-Ridley and leatherback turtles didn't cooperate with us this year -- their egg-laying depends a lot on tides and the moon, and the elements just didn't line up -- but the students nevertheless enjoyed memorable experiences, learned a ton, and had a blast.

Why participate in this program?
Do you love strolling along Park Point in your swimsuit in January?  I didn't think so.  Why not do it in Costa Rica while studying and earning credit, learning to surf, and having the best time of your life.  You can during the coming winter break.  Join us.

Student Perspective
"I went to Costa Rica knowing very little about surfing and came back completely in love with it. Not only did I get to learn how to surf, I also became well-versed in the roots of surf culture, tourism and sustainability. Now that I've been there, I've seriously considered studying or living in Costa Rica in the future. This study abroad experience was hands-down the ultimate part of my college experience at UMD!" -  Hannah Garrett