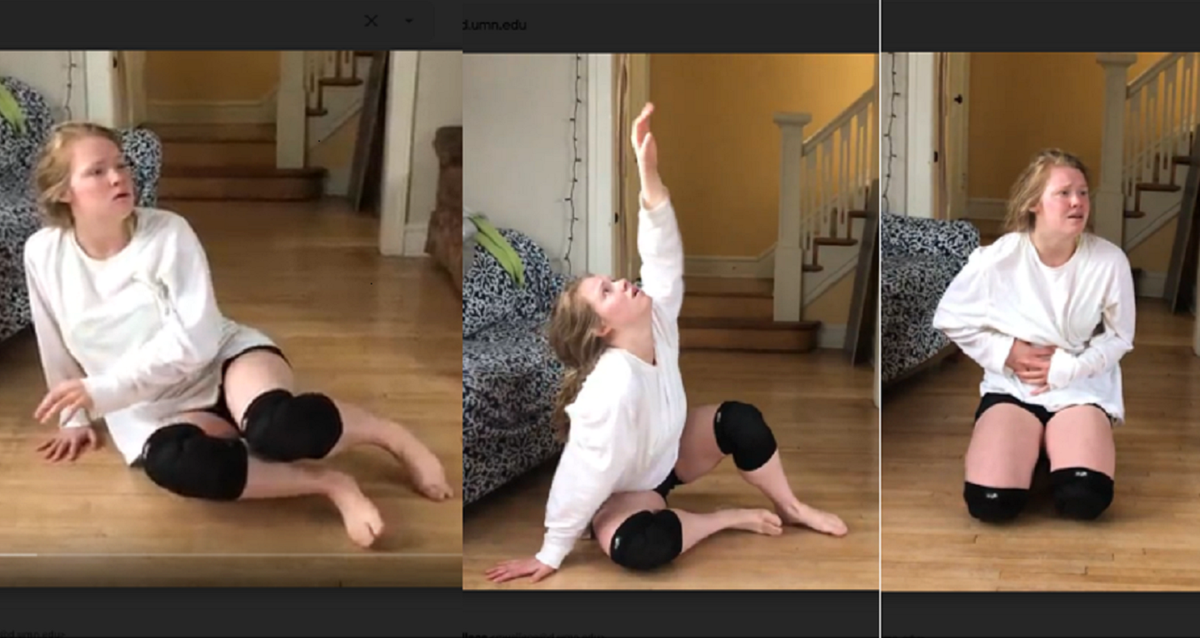 With her double major, UMD student celebrates the humanities and the arts.

Like most students, Jenessa Iverson was juggling multiple projects for her classes at the end of the spring semester. But this wasn’t a normal semester. She was working alone at home because of the COVID-19 restrictions. Jenessa is a UMD senior majoring in Hispanic Studies and Musical Theatre. For her Latin American culture class, she was writing an article about women in Venezuela. For her Physical Theatre class, she was asked to write a short script on a topic she felt passionate about and do a physical performance piece. “Normally, physical theater is very active and requires a lot of social interaction,” says Jenessa, “but obviously we can’t do that right now.” Inspired by what she was learning for her Spanish class, Jenessa created her performance piece about women’s reproductive rights.

In addition to her Hispanic Studies major, Jenessa also speaks German, having spent a year in Germany as an au pair before coming to UMD. “I pretty much spoke no German. By Christmas I was able to hold a conversation and understand what was going on around me, and I came home pretty much fluent. I wouldn’t trade that experience for anything. I think more kids should be doing things like that. I learned a foreign language, made connections that I will keep for my entire life, learned what it’s like to be an adult and find my way on my own, and above all, I learned what it was like to take care of a baby. That experience alone has brought me to levels of empathy and compassion for humanity that would have been otherwise unattainable at my age. It has shaped how I am as an actor, and it has molded my world view in terms of what I want to do with my art moving forward, and my life on a humanitarian level.”

Jenessa decided to write her script in three languages, Spanish, German and English, but they are not simple translations of the same script. The one in Spanish “focuses on women in Venezuela and what they’re going through in terms of birth control, having babies, forced sterilizations, abortion restrictions, and so on”, while the English script “has a harsher perspective that also questions the position of men in the situation.” The German script “takes it from the perspective of a woman living in a country like Germany, which has excellent healthcare and very progressive politics regarding women. She is rejoicing in the circle and cycle of life and the gift of what her body can give her. So all three sort of deal with the same issue but from a different perspective.”

Jenessa hasn't taken German classes at UMD, although she has been a part of the German Club’s ‘Kaffestunden’ and ‘Stammtische’ conversation groups to maintain her German. "When I started here, my thought process was that I already spoke the language and I wanted to improve my Spanish. I would absolutely love to take a German class but it seems that nothing will fit into my schedule. It's hard enough with my two majors: as far as I know, I am the only BFA Musical Theatre student ever at UMD to attempt a second major and finish in four years. I chose to continue with Spanish because I had had four years in high school and I wanted to be a fluent speaker and use it someday. My nephews (ages 4 and 2) are being raised with Spanish and they currently speak more Spanish than English, so it's been imperative to me as an aunt to understand my nephews on every level possible. My other sister, who is due in June, will probably raise her baby with French (her husband is from Togo) and my boyfriend is a native Arabic speaker. So I still have a lot of work to do!”

With the College of Liberal Arts and the School of Fine Arts merging into one college this summer, Jenessa sees a logical connection. “I think SFA shares a lot more in common with CLA than people realize,” she says. “It’s really easy to view the ‘arts’ as one type of thing—a painting, a play, a piece of music. But ‘art’ encompasses so much more than that. It’s a reflection of a world, an idea, a love, or a culture. There’s a reason we say language ‘arts,’ because language, in essence, is art. Each person’s unique language is an expression of themselves—an artistic expression. The more we can share that, the greater our empathy becomes for each other. Language connects us. Art connects us. I think that’s what I find so attractive about these things, as an extrovert and globe-trotter. We are really not so different, after all. In the political climate we have today, it’s imperative that we continue to make these connections in our world.”

This article is based on a series of emails exchanged between Jenessa and Professor Carol Wallace of the World Languages and Cultures Hispanic Studies program. Jenessa shared the video of the project (link above) that was inspired by what she learned in Spanish 3042 – Latin American Civilization, Cultures and Communities, and she gave permission for this to be shared more widely. Jenessa also wants to express her appreciation to her Physical Theatre professor Ann Bergeron, who is retiring this year. “She has been an incredible inspiration to me in the theatre department because she, too, has done a lot of traveling and recognizes art as a global expression of cultural values.”

Back to WLC News & Events