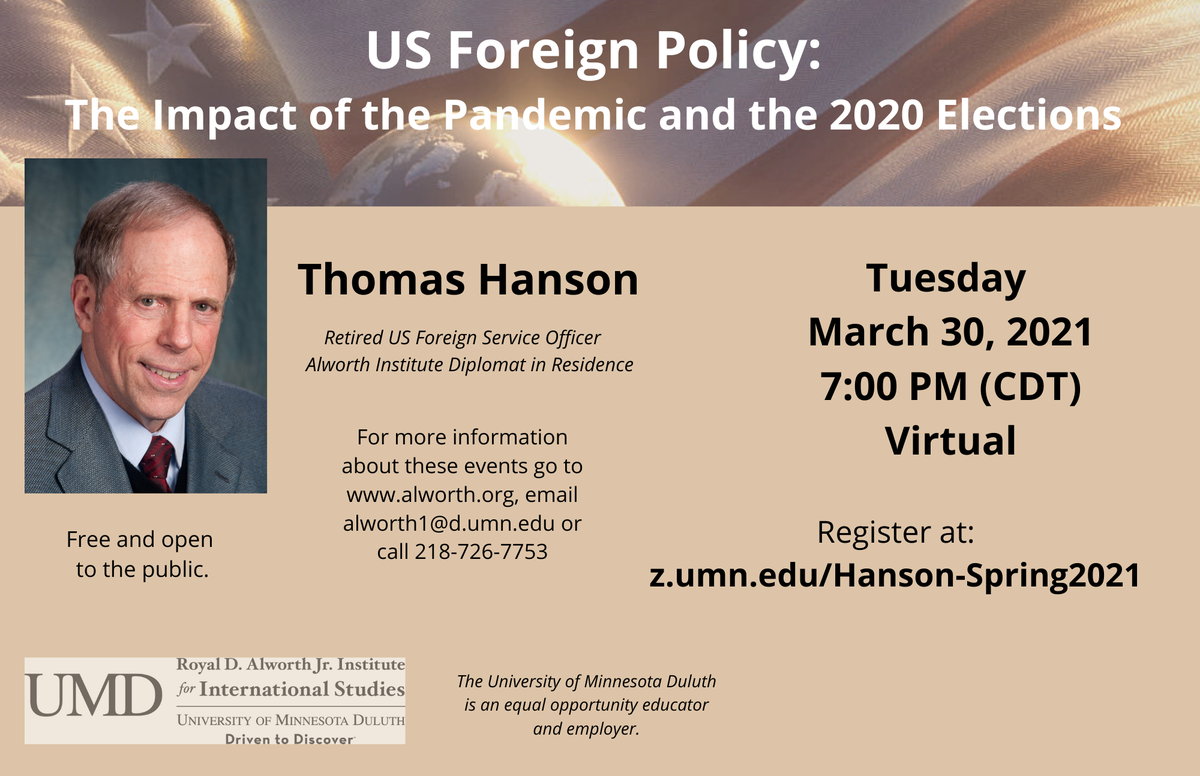 You can register for this virtual webinar by going to z.umn.edu/Hanson-Spring2021.

For several years, Hanson has shared with the UMD and area community his assessment of the impact of presidential elections on U.S. foreign policy. He will provide his current assessment in this talk. President Joe Biden’s administration has faced several international challenges and developed its own foreign policy approach; and, this has been done while the country and the world deal with the COVID-19 pandemic. Hanson will examine the challenges facing the new administration, its foreign policy team, as well as surprises and consistencies revealed in the last three months.

Hanson is a retired US foreign service officer and currently serves as the Alworth Institute Diplomat in residence. He meets each semester with UMD students interested in internships and careers with the US State Department. In his career with the State Department, Hanson’s foreign postings included East Germany, France, Norway, the Soviet Union, Sweden, and Georgia. He also assisted in opening new embassies in Mongolia and Estonia. Hanson has also worked on the Foreign Relations Committees of the U.S. Senate and House of Representatives. He was Director for NATO and European Affairs at the Atlantic Council of the United States in Washington, D.C. He serves on the St. Paul-Minneapolis Committee on Foreign Relations and as a lecturer/consultant for the Minnesota International Center. He is an occasional foreign affairs commentator on Minnesota Public Radio and instructor at many area colleges. Hanson graduated from the University of Minnesota with a B.A. in International Relations. He holds graduate degrees from the Fletcher School of Law and Diplomacy at Tufts University; the Geneva Institute of Advanced International Studies in Switzerland; and the National School of Administration (ENA) in Paris, France.