The Impact of Energy & The Duluth Power Dialog 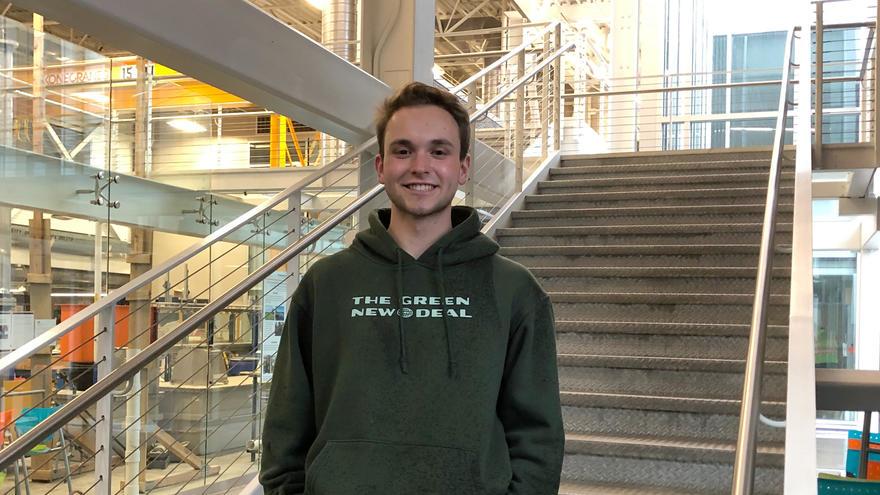 Logan Kalis, junior and a double major in healthcare management and marketing, says, “I love solar panels.” It’s one of the reasons he enrolled in the University of Minnesota Duluth (UMD) anthropology class, Energy, Culture, Society.

“As weird as it sounds, it's something I wanted to learn about, because one day, I want to build my own solar powered house,” he says. Kalis wants his future house to have it’s own battery system. “With the new battery technology now being released, I think that solar-powered homes are going to be a reality in the future.”

The class opened up a new field of research for Kalis. He cites a book that had a powerful impact on him, Children of the Sun: A History of Humanity's Unappeasable Appetite for Energy, by Alfred W. Crosby. “The book brings us back to when fire was the primary energy source and [moves through history] to oil drilling, and steam,” Kalis says. He cites another book, Energy Democracy: Germany's Energiewende to Renewables, by Arne Jungjohann and Edward Craig Morris, which talks about Germany’s [advanced] energy grid. Kalis, who compares Germany to the U.S. says, “The reality is that we have a lot of work to do.”

The Energy, Culture, Society class has presented the Duluth Power Dialog for three years. It was designed by Kathryn Milun, associate professor and director of the Center for Social Research. She's a writer, energy democracy advocate, and community solar activist. She conducts significant research and demonstration projects on the Commons concept and the use of common property for social gain.

In 2021, Kalis, his classmates, Sam Meyer and Joshua South, and others helped Milun put on the Duluth Power Dialog workshop. The two-day spring event was hosted and moderated by students. This event is billed as a “civic conversation about urgent climate and energy issues in the Northern Minnesota region.” The event is also part of the Lake Superior Living Labs Network, where students and faculty at four universities in the Lake Superior watershed – in Canada and the U.S.– share their community-engaged work on energy, climate, and other social-ecological concerns.

Kalis was part of the social media team which focused on Facebook and Instagram to get the word out. South, a freshmen and elementary education major, was a student host for the Sunday event surrounding the conversation about the Manitoba Hydro and the destruction of Indigenous lands. Meyer, a senior anthropology major and biology minor, was involved in the publicity group and also helped spread the word about the event.

Meyer (who uses they/them pronouns) chose this course because they were “interested in culture and bridging the gap between people who don’t have information [on energy and power]. "We wanted the workshop to help make the concepts understandable to everybody,” says Meyer.

The first day of the Duluth Power Dialog event featured speaker Adam Dorr, Ph.D, an environmental social scientist, technology theorist, and futurist. Dorr is currently working on a new study at RethinkX, a non-profit think tank. He says, “renewable energies such as solar, wind and battery storage are far cheaper than believed... they are already outcompeting coal, natural gas, nuclear, and hydro power.”

The second day highlighted the Manitoba Hydro agreement to sell power from its new hydro plant to Minnesota Power. The plant, which is sitting on tribal lands, began generating power in 2020 after a multi-year struggle with the Indigenous residents of the affected area. Sadie-Phoenix Lavoie, an Anishinaabe from Sagkeeng First Nation spoke about social and environmental justice. South was moved by the session. “[Lavoie showed] vulnerability [about] how this is affecting the Indigenous people regarding fishing life and hunting,” says South.

Meyer agrees. "Big plants like Manitoba Hydro, which is 250 megawatts, aren't considered renewable. Hydro plants over 100 megawatts do harm to ecology, biology, and peoples lives," Meyer says. "In Manitoba, it affects the culture of the people who live in that area."

Kalis, South, and Meyer all plan to continue their engagement in aspects of energy and power. Meyer says, “I think differently [now, about] culture and how power affects Indigenous people.”

While South is looking forward to a career as a teacher, he doesn't want to forget the class. He wants to “attend things like utilities public hearings and find community clubs and organizations that educate the community.”

The anthropology class, Energy, Culture, Society, as well as the Duluth Power Dialog, have clearly opened many eyes. It has especially impacted these three students and their classmates.

About the UMD Department of Anthropology, Sociology, and Criminology

This story was co-written by UMD student Eva Moua, who is majoring in communication. Eva works with Cheryl Reitan in University Marketing and Public Relations.