Serving the U.S. in Japan 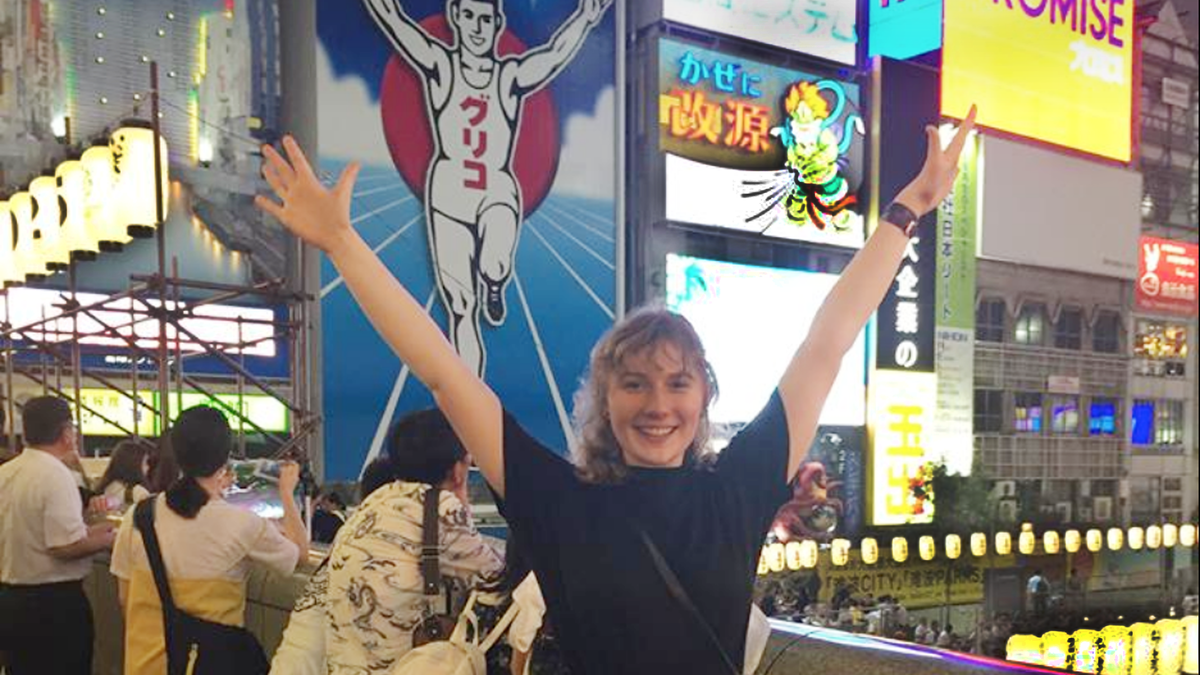 Kelsey's morning commute takes her about an hour. She leaves her rented room in a Japanese family home and travels to the U.S. Consulate General, Osaka-Kobe. On the way to work, she stands in the train car, crushed against the window surrounded by hundreds men and women, all speaking Japanese. The underground tunnels on her walk to work are full of rushing people moving in all different directions, and she has to move carefully to avoid crashing into this swirling sea of people.

Thomas (Tom) Hanson with Kelsey Gunvalson. Tom is a retired U.S. State Department official and the Diplomat in Residence with UMD's Alworth Institute for International Studies.

She arrives at the consulate, which is a building standing ten stories high surrounded by a full-time security team and Japanese police twenty-four hours a day, seven days a week. There, Kelsey is escorted in by Japanese police and consulate security while being greeted by her colleagues. She takes a few minutes to catch her breath before assisting clients. "I worked in the American Citizen Services and Non-immigrant Visa sections of the consulate" she says. "I have done other things too, like attending the annual 4th of July consulate party held at Universal Studios but most of all, I am one of the first faces people see at the consulate”.

She is enjoying her ten-week internship with the U.S. State Department, representing the U.S. government on the other side of the globe.

Traveling through Japan has been an adventure for Kelsey. "I've been to many places including Kyoto, Himeji, Nara, and Tokyo," she says. "My favorite experience of all was climbing Mt. Fuji. It was so challenging and rewarding, and I will remember it forever.” Kelsey climbed for about six hours to reach the top of the inactive volcano 12,388 feet above sea level. She stopped to eat and sleep for few hours in a mountain hut and reached the top to see the sunrise. "Part of the hike was easy," she says. "I climbed on red clay, rock and stones. Other parts were exhausting. The altitude made it hard to breathe, and I had to climb over gigantic boulders for part of it.

“This internship has changed my life," Kelsey says. "So many opportunities have presented themselves to me throughout this summer," Kelsey says. She wants the adventures to continue. "I plan to apply for the State Department Fulbright Scholarship when I come back to UMD."

Kelsey has two majors, environment & sustainability and philosophy, both in UMD's College of Liberal Arts, and plans to graduate in fall 2018. She received the Roland and Evelyn Theisen Scholarship in 2016 and the Ebert Stembler Scholarship in 2017.  "These scholarship gave me financial means to pursue goals and opportunities that would not otherwise be possible, and I am very grateful.”

She heard about the State Department internships from Tom Hanson, diplomat-in-residence at UMD. Tom served as a Foreign Service officer with the Department of State for nearly 25 years. His postings included East Germany, France, Norway, the Soviet Union, Sweden, and Georgia. He assisted in opening new embassies in Mongolia and Estonia.

Kelsey follows in the footsteps of other UMD Bulldogs. A UMD alumna, Josie Strom '16, interned for the state department in Nicosia, Cyprus, and Jared Strom '15 has been working  as a diplomatic courier at the U.S. Department of State Office in Bangkok, Thailand since January 2017. As a student, Jared served as an intern at the Kuwait Embassy for four months.