Alexandera Houchin, AIS major, is student of the month! 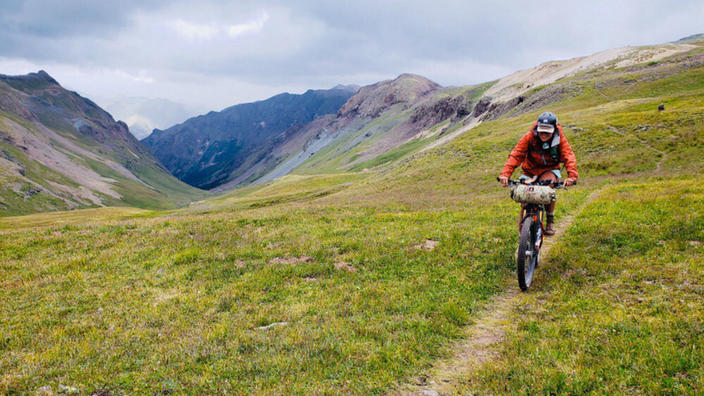 Bulldog of the month: Alexandera Houchin

Houchin stated that another specialty of the UMD American Indian Studies program is the sense of community.

Alexandera Houchin is a senior at UMD majoring in American Indian Studies and Chemistry. Houchin said she “really likes to ride bikes.”

Houchin’s passion for cycling can be seen in her blog, Alex, and her rastro, and her recent bicycling achievements.

Houchin is the female winner of the 2018 Tour Divide, an annual mountain biking event that spans 2,745 miles of the Rocky Mountains from Canada to Mexico.

“You go up and over the Rocky Mountains, zigzagging back and forth all the way down to Mexico,” Houchin said.

Houchin was first inspired to attempt this race by a documentary on the Tour Divide.

“I watched this documentary years back about a bunch of these people who race [Continental Divide],” Houchin said. “It was recommended to me, so I watched it and I was like ‘oh my god, I have to do that.’”

According to Houchin, a race like the Tour Divide requires a lot of preparation. It took Houchin years to properly equip for the competition on the Rockies.

“You have to have all the gear and you have to save up money for traveling,” Houchin said.

“We did that in 45 days, just chilling and having a grand, old time,” Houchin said. “During that, I saw the [Tour Divide] racers going south and thought ‘oh, that looks cool.’ I didn’t think I’d ever be athletic enough to do that.”

Houchin stated that she took another bike tour in 2017, where she rode from Tucson, Arizona, to Canada with a friend on a different route.

“I was going to race back down but I quit day three into the race,” Houchin said. “My bike was falling apart. I ran out of money. I had all sorts of different excuses.”

Houchin said giving up on something she loved to do was eating at her soul. She believed that she set her goals too high for that race, so the next year she was reeling about it.

Houchin stated that she wanted to get back out on her bike, so she decided to set a new goal after her 28th birthday last year.

“I did a race on my birthday weekend,” Houchin said. “I was like ‘I’m going to do eight races in my 28th year of life.’”

Houchin has achieved a total of seven races and will accomplish the eighth right after her 29th birthday.

Houchin stated she has one bike but had to replace several parts of it over the summer.

“My bike is tired,” Houchin said. “I just did a race in Boise, Idaho, and my bike made it through, but I got a flat tire.”

Houchin said her bike has been really struggling but is hoping it makes it through her eighth race.

Houchin said she focuses on school rather than cycling during the academic year.

“I didn’t ride at all during the school year last year,” Houchin said. “Hopefully this year is a little different so I can juggle both of them.”

Before studying at UMD, Houchin attended the American Indian Studies Program at the University of Arizona.

Houchin stated she didn’t realize how different the southwest tribes were from the Great Lake tribes. This realization was part of the reason she transferred to UMD. That, and the differences in climates.

Houchin is a proud member of the Fond du Lac nation.

“As I started studying the tribes, I realized that I wanted to work with my tribe back home so I moved back,” Houchin said.

According to Houchin, Arizona was “way too dry” and extremely hot, the complete opposite of the northern Minnesota climate she was accustomed to.

“I feel like every little bird’s got to fly away from home,” Houchin said. “I flew all the way to Arizona and found out it’s just too hot, and there’s just no water. Two big things that we have here.”

“First off, it’s focused on the Great Lakes tribes, which is important to me,” Houchin said. “The faculty in that department are extraordinary.”

Houchin stated that another specialty of the UMD American Indian Studies program is the sense of community.

“It’s small,” Houchin said. “I know all of these teachers. [The University of Arizona] is a big school. It’s one of the biggest schools in the nation. I was just a number.”

According to Houchin, she’s invested less in chemistry than she is in American Indian Studies.

“I’m actually going to school to be a dentist,” Houchin said. “I want to work with native populations so I thought I should take American Indian Studies so I can understand the people I want to serve.”

Houchin stated she does not only want to learn about her own Fond du Lac culture or the culture of Lake Superior Ojibwe but wants to acquire knowledge on “all of Indian country.”

“American Indian Studies will help teach me more about things that I don’t know about,” Houchin said.

Houchin suggested that current students should take classes that they’re interested in.

“If you’re interested in it, you’re going to apply yourself more and be invested in it,” Houchin said. “That’s where you might get pulled in another direction. Keep following your heart.”