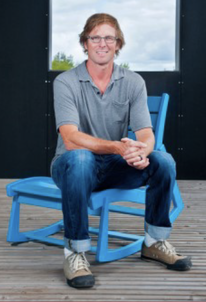 Greg Benson, co-founder and CEO of Loll Designs, graduated in 2016, having returned as a non-traditional student after a lengthy hiatus while he built several companies – from skate parks to furniture to cutting boards. Loll Designs and Epicurean Cutting Surfaces offers environmentally conscious products, made in the USA from recycled and sustainable materials, and sold in over 50 countries.

“I’ve literally climbed some mountains and sailed a few seas,” jokes Greg, an enthusiastic outdoor addict who enjoys biking, trail running, snowboarding, and sailing. It was this adventurous, exploratory aspect of his personality that resolved Greg to avoid the traditional corporate world. “I was hesitant to get behind a desk in an office. I knew I wanted something different but didn’t really know what that was,” he says simply. “Working with my hands outside seemed like a good place to start looking.”

Greg grew up with the founders of Rollerblade Skates in Bloomington, MN, and had worked for the company on and off for years. Along with his brother and another friend who also worked for Rollerblade, the three noticed a trend of cities installing skate parks. Being entrepreneurial, they decided to start a skate ramp design/build company and in 1997 they founded municipal skate park manufacturer, TrueRide, in Duluth, MN.

TrueRide led directly to Greg’s next adventure, outdoor furniture. Loll Designs initially came out of a desire to use excess material from TrueRide skate ramps. And his goal? To make sustainable outdoor furniture that is high in design, low in impact on the environment, and socially responsible. “I want Loll Designs to be a unique outdoor furniture brand that represents how manufacturing can offer more than cheap plastic throw-away furniture,” he says. Finding success and a new direction with Loll Designs, TrueRide was sold in 2007 after 10 years and more than 450 skate parks installed worldwide.

Greg’s degree from UMD, as well his aspirations to become an environmental writer, helped solidify his strong beliefs that a business should be responsible not only to its customers, but also to its employees and the planet at large. Loll Designs also originated from this mindset of using materials economically and ecologically. Greg’s interest in Loll Designs, however, doesn’t just end there. Passionate about design, his initial sketches often become fully realized products. Greg is inspired by notable twentieth century modernist design, and these influences shine through in the unembellished finished products. Three of Greg’s designs, the Cabrio Lounge Chair (2009), Pliny the Lounger (2011), and the Lollygagger Lounge (2014) are honored with Good Design Awards by the Chicago Athenaeum.