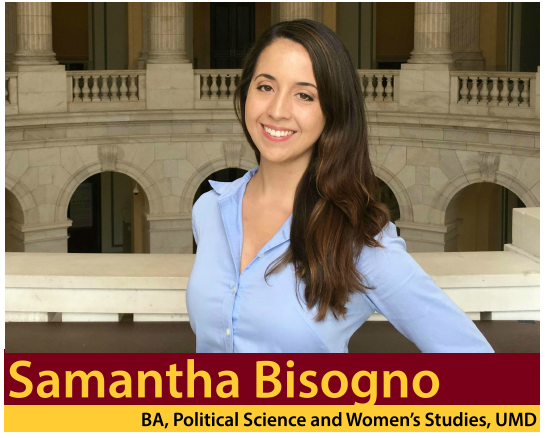 One week after graduating from UMD, Samantha Bisogno traveled to Washington D.C. for a summer internship in the U.S. House of Representatives. After completing her internship, Samantha was offered a job in the office as the Communications Assistant and was promoted to Press Secretary shortly thereafter.

As the Press Secretary for a Congressman in Washington D.C., Samantha develops the office’s press strategy, pitches stories and builds relationships with national and local journalists, evaluates daily breaking news and public policy priorities, writes press releases and other statements, and accompanies the Congressman to various media events. She has helped the Congressman land major interviews with several national publications and programs, including CBS’s 60 MINUTES and the Washington Post.

As a student, Samantha sat on the Board of Directors for the Minnesota Public Interest Research Group (MPIRG) for three years and the Board of Directors for the Clayton Jackson McGhie Memorial for one year. She served as President of the UMD College Democrats for the 2011-2012 school year and worked on multiple local, state, and national campaigns. Samantha volunteered as an On-Call Advocate at the Safe Haven Shelter and Resource Center and was employed by the local YWCA. She also competed on the UMD Mock Trial team and participated in several Multicultural Center student groups.